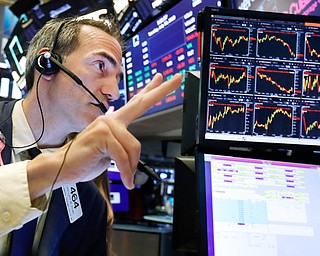 Gregory Rowe works on the floor of the New York Stock Exchange in this July 30 file photo. An economic alarm bell is sounding in the U.S. and sending warnings of a potential recession.

They spoke on the two-year anniversary of the president’s last visit to the area when he urged the crowd, “Don’t sell your house,” and promised the return of the Valley's manufacturing jobs.

General Motors plans to add 400 jobs and build a new electric vehicle at a factory north of Detroit. 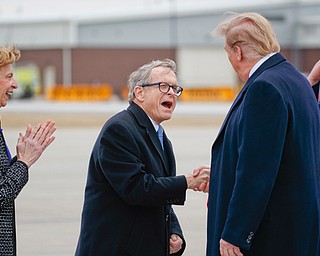 Gov. Mike DeWine greets Trump as he arrives at Akron-Canton Airport on Wednesday for a late-evening fundraiser in Canton.

The President said the economy is strong, and urged GM to bring a new product to Lordstown.

President Donald Trump hoped for “great things” from his second meeting with North Korea’s Kim Jong Un as he paid a courtesy call today on his Vietnamese hosts. 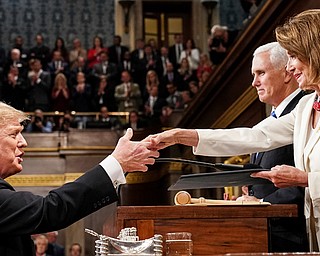 In this New York Times/Associated Press photo, President Donald Trump shakes hands with House Speaker Nancy Pelosi, D-Calif., as he arrives in the House chamber Tuesday night before giving his State of the Union address to a joint session of Congress at the Capitol in Washington. Vice President Mike Pence looks on.

Associated Press WASHINGTON The government shutdown is wreaking havoc on many Americans: 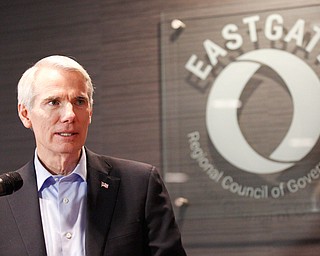 The Republican expects the president to declare a national emergency to secure funds for his border wall.

Federal shutdown forces some to work without pay

‘It’s un-American to ask anyone to work and not get paid,’ a prison employee at Elkton said.

Democrats accuse Trump of appealing to ‘fear, not facts’. 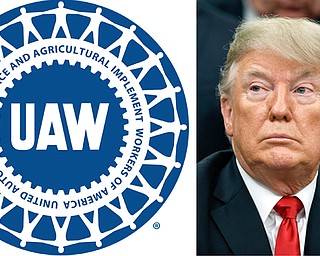 “A lot of our members believed in what you said,” the local autoworkers told the president.

More than 300 jobs for GM Lordstown workers to apply for

Time magazine on Tuesday recognized journalists, including the slain Saudi columnist Jamal Khashoggi, as its 2018 Person of the Year in what it said was an effort to emphasize the importance of reporters’ work in an increasingly hostile world.

Ryan joined four other representatives to send a letter inviting him to meet with workers at the soon-to-be idled GM plants and called on him to fulfill campaign promises.

Ohio congressmen to meet today with GM CEO about Lordstown

"It’s my hope that Mary Barra and I can find a path forward, bring a new product to the Lordstown plant, and keep these jobs in the Mahoning Valley,” U.S. Rep. Tim Ryan said.

As news of General Motors’ decision to cease production of the Lordstown-built Chevrolet Cruze and idle the Lordstown plant next year continued to ripple throughout the Mahoning Valley, some of the Valley’s elected officials took the fight to save the plant to Washington, D.C.