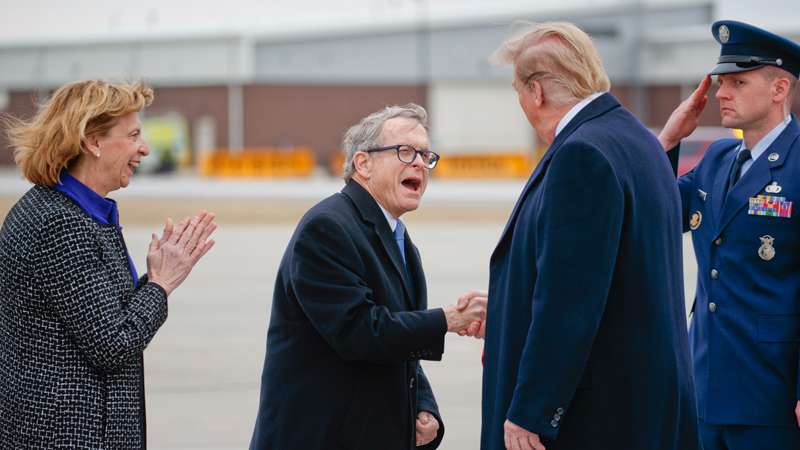 President Donald Trump attended a private fundraiser here Wednesday night, but before heading to Northeast Ohio, he spoke in Lima, and again called on General Motors to reopen or sell the idled Lords-town Assembly Complex.

There is no product there after GM shut down Chevrolet Cruze production March 6, idling three shifts of workers or displacing them to other states.

Trump’s visit to Ohio marked his first trip to the state since last year’s midterm election campaign. He visited the tank plant, which had been at risk for closure. But he said it is now benefiting from his administration’s investments in defense spending.

The president also urged GM and the UAW to step up the pace of contract talks now rather than later in the year. Trump took aim at the union, telling the autoworkers the union should lower its dues, adding, “They could’ve kept Lordstown.”

There is no connection between union dues and the operations of GM, however.

Also, the UAW decided last year to lower dues to the level it was in the 1960s once the union’s strike fund hits $850 million, which is expected shortly.

Trump also noted he had a lot of support from the Mahoning Valley area now being hit hard by unemployment: “Lordstown’s a great area. I guess I like it because I won so big there.”

Bob Paduchik, senior adviser to the Trump 2020 campaign and his 2016 Ohio chairman, said Wednesday the president plans to campaign often in Northeast Ohio, including the Mahoning Valley.

“He loves doing [rallies], and they’ve been really successful for us, particularly in Northeast Ohio,” Paduchik said. “We’ll be back here a lot between now and Election Day” 2020.

Paduchik added that “you can count” on Trump coming to the Valley.

“He loves the Valley,” Paduchik said. “I’m not sure if we can get him back to the Canfield Fair again like we did last time” because of Secret Service concerns.

Trump campaigned at the fair Sept. 5, 2016, attracting a huge crowd to see his brief visit there.

The private fundraiser at the Brookside County Club, just outside of Canton, reportedly raised $3 million. Tickets for the country club soiree started at $2,800 and went as high as $70,000 for a couple.

Columbiana County Commissioner Michael Halleck, a Republican who attended the event, said there were about 300 people there. Unlike his stop in Lima, Halleck said Trump didn’t mention GM Lords-town during his fundraiser.

“It wasn’t anything bombastic,” Halleck said. “It was just a good, wholesome message.”

U.S. Rep. Tim Ryan of Howland, D-13th, was not impressed by Trump’s rhetoric Wednesday, however.

“We received more empty rhetoric from the president of the United States. Losing GM Lordstown is more than just losing a plant. It means workers losing their livelihoods. It means families being forced to leave everything behind and move away from our community,” Ryan said in a statement after Trump’s speech.

“Northeast Ohio is set to lose more than $3 billion in economic activity, and what is the president doing to help? He attacked union leaders like Dave Green, who are fighting hard to save this plant and standing up for its employees.”

U.S. Sen. Sherrod Brown, a Cleveland Democrat, added in a statement: “The president is hurting military missions by taking money away from Ohio military installations to pay for his vanity project. He attacks Sen. [John] McCain, a war hero and a patriot. He failed to stand up for Lordstown as GM closed its plant and laid off thousands of workers. While the president promises one thing, he continues to pursue policies that betray Ohio service members, veterans, families and workers.”

At the Lima plant in northwest Ohio, U.S. Sen. Rob Portman, a Cincinnati-area Republican, said, “The best tanks and armored vehicles in the world are made in Lima, Ohio. The JSMC and our Ohio workers are not just making our country safer, they’re supporting our allies around the world during some very dangerous times.”

The president arrived at the Akron-Canton Airport at 5:19 p.m., where he was greeted by Republican Gov. Mike DeWine and his wife, Fran.

Trump kept away from journalists, including two from The Vindicator, who were corralled and watched him from a distance chat with employees of McKinley Air Inc. and their families and friends.

He then got in a limousine with the DeWines and was taken to the private fundraiser.

Perhaps no state has better illustrated the re-aligning effects of Trump’s candidacy and presidency than Ohio, where traditionally Democratic-leaning working-class voters have swung heavily toward the GOP, and moderate Republicans in populous suburban counties have shifted away from Trump.

It’s for that reason, administration officials said, that Trump keeps returning to Ohio – the visit marks his 10th to the state since taking office.

The visit is part of a 2020 Trump strategy to appear in battleground states in his official White House capacity as much as possible this year, said a person with knowledge of the plans who was not authorized to speak publicly.

Trump is expected to make similar trips throughout the year as he seeks to boost enthusiasm to counter an energized Democratic base. It’s a strategy employed by previous presidents, both to leverage the prestige of office for political purposes and to offset the steep costs of presidential campaign travel with corresponding taxpayer-funded events.