The Philadelphia Phillies got 17 hits

Young talks the talk, backs it up

Hoskins’ gaffe delivers Pirates a win in the 9th

FCS powerhouse is ready despite a slew of losses

Beckham back on field with Browns’ offense after hip issue

Odell Beckham Jr. is closer to being game ready

AROUND THE HORN | Monday’s other MLB games 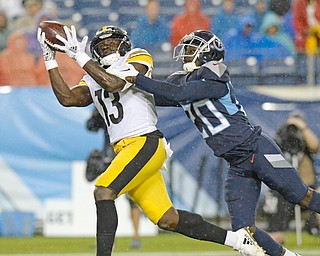 Roethlisberger gets ready with 3 short series as Steelers handle Titans

Pittsburgh Steelers wide receiver James Washington (13) catches a 41-yard touchdown pass as he is defended by Tennessee Titans defensive back Kenneth Durden (20) in the first half of Sunday’s game in Nashville, Tenn. The Steelers won, 18-6.

Kitchens searching for answers after flop

Mayfield failed to connect on 16 passes