AROUND THE NFL Saturday’s preseason games, plus news & notes

AROUND THE HORN Friday’s other MLB games

Hand pulls through vs Royals

Things feel better for Osaka back in New York

Everything felt better for Naomi Osaka once she returned to the U.S. Open

A preseason game became significant because key players on both teams were hurt. 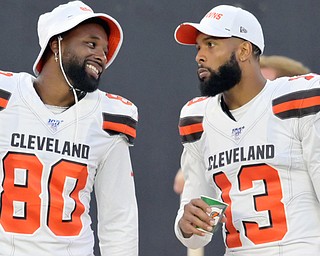 Browns pump up to give Steelers run for crown

In this Aug. 8 file photo, Cleveland Browns wide receivers Jarvis Landry (80) and Odell Beckham Jr. (13) talk on the sideline during an NFL preseason football game against the Washington Redskins in Cleveland. The expansion era has been tortuous, two embarrassing decades of despair and dysfunction. Those painful days appear to be ending.