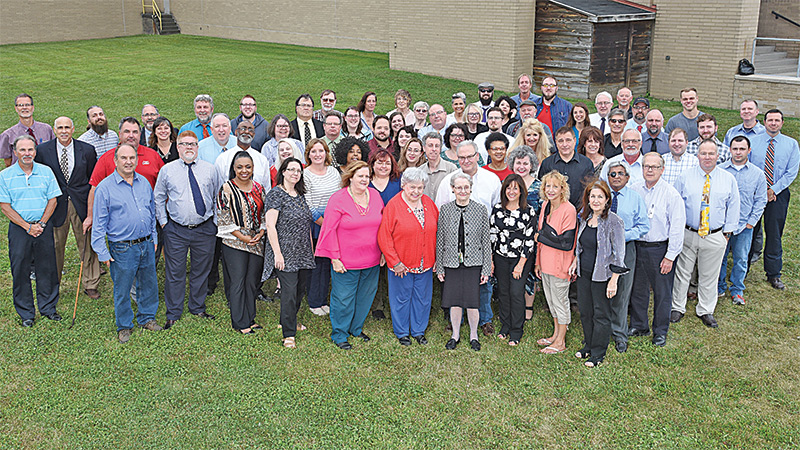 While The Vindicator name will live on, today marks the end of an era at the 150-year-old newspaper.

The Tribune Chronicle purchased the newspaper’s masthead, web domain address and subscription list and will increase its presence in Mahoning County, adding some Vindicator employees.

But many of the newspaper’s workers will either find jobs elsewhere, retire or search for work.

Mark Brown, whose family has owned the newspaper for 132 of its 150 years, said shutting it down was the toughest decision he’s ever had to make.

“It’s been a nightmare for five years knowing we’d have to sell at some point,” said Brown, the fourth-generation owner of the newspaper.

However, attempts to sell The Vindicator outright were unsuccessful.

“I didn’t think it could get worse, but it has,” Brown said.

What does he want to tell his now former employees?

“I’m really sorry we couldn’t find a buyer so that a good number of them had kept a job,” Brown said. “It’s a real disappointment. It’s been a pleasure working with everybody. We got one of the best crews we ever had. People work well with each other.”

The newspaper’s general manager for the past 38 years admits he doesn’t like to talk about The Vindicator’s closure.

Brown avoided discussing the closure with one of the newspaper’s reporters for several days before reluctantly agreeing to speak.

“I’ve been able to avoid thinking about it as much as I can,” he said. “But the closer you get to it, you can’t help have those thoughts all the time.”

He added: “The impact this has on the people who work here has been the heartbreaking part of it. I feel good when I find out people have jobs. It’s a momentary sigh of relief, a burst of happiness. But it fades quickly because I know there’s a whole lot of people who haven’t found jobs. People are losing benefits and not getting paid as much. It’s a double whammy.”

It’s the family’s history with the newspaper – starting with the purchase of The Vindicator nameplate and remnants of a fire-damaged print shop by William F. Maag at a Dec. 22, 1887, sheriff’s sale – that kept it open during tough financial times, including losing money in 20 of the past 22 years, Brown said.

“We would have made a different decision,” he said. “A normal business person would have said, ‘It’s insane to remain open.’”

The Mahoning Valley has struggled economically since the late 1970s, particularly after the collapse of the steel industry, which was the area’s largest employer.

In 1989, one of the newspaper’s better years in the past few decades, its profit margin was 17 percent to 18 percent.

“That’s great for a normal business, but everyone else in the newspaper business was in the 30 to 40 percent range,” he said.

Brown announced June 28, just days after the newspaper celebrated its 150th anniversary, that it would shut down, effective today.

“I was surprised by the community’s reaction,” he said. “People are upset we won’t be around. I’ve spent 38 years of people yelling at me and cussing at me. Now, people are sorry to see us close. I didn’t expect that. It was a pleasant surprise, though it hasn’t been an overly good situation.”

Brown added: “I want to thank the people who’ve supported us over the years. We hope we’ve been a benefit to them.”

Maag purchased the newspaper’s nameplate and print shop at an 1887 auction. He was there as a spectator and had no intention of purchasing the newspaper, but his opening bid was the only one. When Maag died April 10, 1924, his son, William F. Maag Jr., the managing editor, became general manager and, later, editor and publisher.

“We’re the checks and balances on government,” he said. “I’m very concerned about the future of the industry. You can’t have the losses the industry has had and still sustain it. You’ve got to stop the revenue loss, but if the revenue isn’t there, it isn’t there.”

Almost immediately after the announcement, The Vindicator’s closure became an international story. Reporters and photographers came in and out of the newspaper’s building to write its obituary.

Several of those stories are running today or Sunday.

In a recent article, The Guardian wrote about the Ku Klux Klan gathering outside the home of Maag Jr. in the late 1920s because The Vindicator, which he owned, criticized the group.

The article read: “The men of the Maag family would stand outside their home, themselves armed, refusing to be cowed, as the Vindicator continued to expose government officials who were part of the Klan.

“That defiance set the tone for decades of investigative, combative reporting from The Vindicator. The daily newspaper relentlessly reported on the Mafia, the government, big business and even its own advertisers.”

Margaret Sullivan, media columnist for The Washington Post, wrote of The Vindicator: “It’s a sad story. And, as local newspapers enter an inevitable new phase of their decline, one that will become far too familiar.”

As for what will happen with The Vindicator building on the corner of Vindicator Square and West Front Street, Brown said, “We’re going to put it up for sale. We haven’t done anything with the building. We haven’t had time. We’ve been too busy negotiating with the unions on severance, setting up unemployment and health insurance information for our employees.”