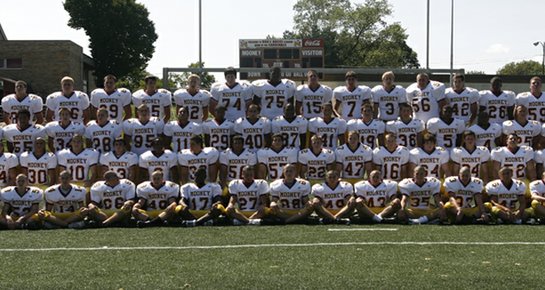 After a "rebuilding" year, the Cardinals should again be in the hunt for a state title. Mooney returns 23 lettermen, including 15 starters, and have weapons all over the place. The backfield features seniors Braylon Heard (a West Virginia recruit), Ray Vinopal and Karrington Griffin, with senior QB Alex Zordich looking to take the next step after a solid junior year. Division I recruit Eric Franklin, a senior tackle, anchors a typically big and strong offensive line. Defensive, seniors like Mark Brandenstein, Chuck Gruber and Joe Stoops return at linebacker with Donald D'Alesio, George Lyras and John Stoops joining Heard and Vinopal in the defensive backfield. There's talent everywhere, but the schedule is tough and it won't get any easier in the postseason. The Cardinals moved up to Division III this offseason.