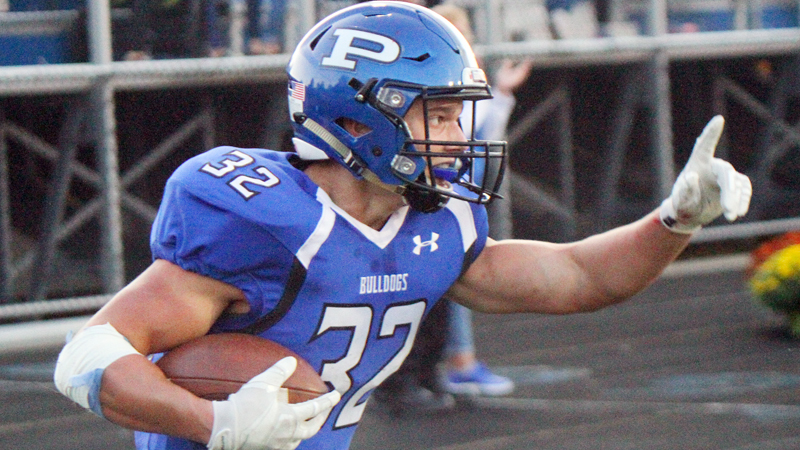 As Williams put it, “You don’t replace. You find new.”

Poland lost some key players with valuable experience. Now its Williams’ job to find the next impact players.

“Let’s turn our weaknesses into our strengths,” Williams said. “Let’s find who can do what and ask them to do that.”

The Bulldogs will need some players to step up following a 6-4 season where Poland missed the playoffs. Williams said the team has the potential to be successful. He said the playoffs are not a part of the “daily conversation.”

“The playoff are the reward, ” Williams said. “It’s out there, it’s certainly the goal. You love this game, you want to play as many games as they’ll let ya. To do that you have to take care of today. You have to win the next drill, win the next possession and take care of the little details. They equate to big things happening at the end of the season.”

The Bulldogs already suffered a couple injuries in practice.

“A wide receiver [is done with] a season-ending shoulder injury,” Williams said. “We have a couple other seniors that are already guaranteed to miss a good chunk of the season. So we had to learn to handle some adversity already in this short season.”

The Bulldogs lost a four-year starting quarterback in Cole Kosco, but Poland is still going to air it out.

Williams said the team is preparing to throw the ball a little bit more than in the past. Junior Todd Brody will replace Kosco under center.

“He’s shown that he’s able to handle a lot from the playbook,” Williams said. “We just keep puttin’ it on him and he’s handled things great.”

The Bulldogs aren’t short on receivers.

Poland has over 20 receivers on the 2019 roster. Michael Voitus played tight end last year and is getting snaps at receiver. Mike Kushner, Mitchell Kluchar, Antonio Gay and Andrew Centofanti are also catching passes.

Seniors Joshua Alessi and Jake Rutana are returning at running back. Juniors Jacob Caudle and Dean Gessler have also split carries in camp.

Junior tackle Karter Kellgren and senior guard Alex Feliciano has started the last three years, and are the only returning starters on the offensive line. Jared Tucker and Nate Williams will play tackle and center respectively.

The Bulldogs need to replace Scott Campbell on the defensive line. The 6-5, 240-pound defensive end was an all-conference selection in previous seasons.

Poland’s other three linemen are coming back. And the Bulldogs still have a big man in the middle with senior Alex Feliciano, a 350-pound lineman.

Poland has to rebuild its linebackers. Junior Peyton Mrakovich will play linebacker and Caudle moved from the secondary to the second level.

Kluchar and Kushner have impressed at corner. Jack Fulton and Gessler are playing safety.

For yet another year, Kushner will handle the kicking responsibilities.

Voitus and Mrakovich both have experience at long snapper. Nate Williams will snap on extra points and Gay will hold.

Former Sebring coach and YSU kicker Brian Palmer is on staff. He has been working with punters Brendan Gurd and Adam Rumble.

“We always put a lot of emphasis on our special teams,” Ryan Williams said. “And this year, I think we could be as good as any year with the amount of attention that they’re getting.”