The Environmental Defense Fund, a nonprofit environmental advocacy group, released a report that highlighted companies that developed technologies and services for the emerging methane mitigation industry.

An update on lawmaker action and other activities at the Ohio Statehouse related to horizontal hydraulic fracturing.

SHALE INSIGHT conference set in Pittsburgh next week Pittsburgh In its fourth year, the SHALE

Environmentalists want to lift a cap on fines for violations, while industry officials want to limit who can ask for a public hearing 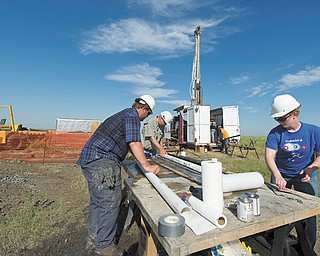 By BURTON SPEAKMAN bspeakman@vindy.com YOUNGSTOWN A group of Youngstown activists hopes the

The Ohio Department of Natural Resources reports Ohio’s natural gas production nearly doubled from 2012 to 2013 because of the activity in the Utica shale play.

A presentation by Austin Master Services at Youngstown City Hall Wednesday evening clarified the process the company is taking in testing radioactivity in materials that come out of the earth through the process of hydraulic fracking.

Associated Press AZLE, Texas Earthquakes used to be almost unheard of on the vast stretches of

Henrietta Bibbs takes exception to many aspects of hydraulic fracturing in the Mahoning Valley, such as the oil and gas industry’s claims of job creation.

Associated Press HARRISBURG, PA. Tom Wolf may not hold an elected office yet, but as Democratic

The new president will find changes on campus after his time away.