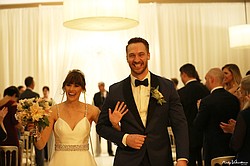 Karl Haff heard the exchange of vows between Sarah Grabert and James Harrison during a ceremony at 5:30 p.m. Nov. 17, 2018, at Stan Mansion in Chicago. A reception at the same location immediately followed the ceremony.

The couple honeymooned in Greece and reside in Chicago.

The bride is a daughter of Steven and Christine Grabert of Boardman, and the groom’s parents are William and Joan Harrison of Chicago.

The bride wore a satin, sleeveless gown with jeweled shoulder straps and a jeweled belt.

Pamela Rowan, sister of the bride, and Rachel Harrison, the groom’s sister-in-law, were matrons of honor.

Her husband holds a bachelor’s degree in business and marketing from Northern Illinois University. He is a vice president at ADP in Chicago.