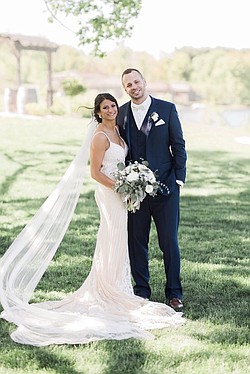 Monsignor Peter Polando heard the exchange of vows between Lindsey Tokarsky and Anthony Marsico during a 1 p.m. May 11 wedding ceremony at St. Columba Cathedral in Youngstown.

After accepting congratulations at a reception at The Vineyards at Pine Lake in Columbiana, the couple honeymooned in St. Lucia and reside in Poland.

The bride is a daughter of Jeff and Sherry Tokarsky of Boardman. Parents of the groom are Martin Marsico of Cape Coral, Fla., and Nita Marsico of Poland.

The attendants wore tan with green and white floral dresses.

Rick Marsico and Dylan and Cooper Modelski, all nephews of the groom, were ring bearers.

Mrs. Marsico graduated from Youngstown State University with a bachelor’s degree. She is an account executive for Toshiba in New Castle, Pa.

Mr. Marsico earned a bachelor’s degree from YSU and is a regional sales manager for Commercial Metal Forming in Youngstown.