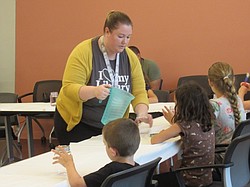 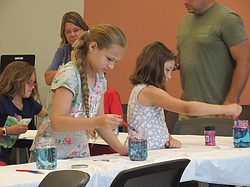 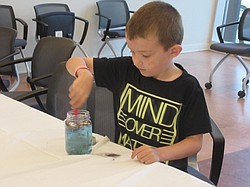 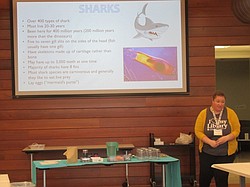 She started the program by teaching children about the different types of sharks.

Each of these types of sharks had corresponding plastic versions available for children to place in their shark tanks.

Based on the information provided by Dale, children selected three sharks to place in their tanks.

“It’s a really easy craft that anyone can do,” Dale said. “It’s a kind of sensory bottle.”

Children started with a plastic jar that Dale filled with water.

She added food coloring to turn the water blue, and then children added the sharks, beads and glitter to the jars.

After adding everything they wanted to children were able to hot glue the lids closed to prevent them from leaking.

“I like to have something everyone can take home,” Dale said.

Along with this event, the library is hosting a number of programs throughout the week to celebrate Shark Week.

Both the Michael Kusalaba library and the Austintown library also hosted a shark sticker scavenger hunt.

Every child that could locate the 15 hidden shark stickers in the library was entered to win a prize at the end of the week.