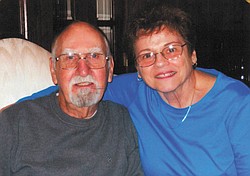 Their children are Michael Cap of Henderson, Nev.; Michele (Cap) Laws of Mooresville, N.C.; and Kelly Cap of Pinehurst, N.C. They also have a granddaughter, Sarah.

The former Nancy Holecko and Mr. Cap were married June 4, 1966, at Sacred Heart Church in Youngstown. The couple have been members of St. Charles Church for 40 years.