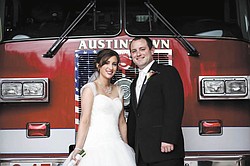 After a wedding trip to Cozumel, Mexico, the couple reside in Canfield.

The bride wore a ball gown featuring a sweetheart neckline and ruched tulle with asymmetrical draping. It was embellished with beaded appliqu and completed with a chapel train.

Ushers were Justin and Jared Vinkler, cousins of the bride.

Mrs. Metzinger graduated from Youngstown State University with a degree in telecommunications. She is employed as a customer support manager for Via680 in Youngstown.

The groom graduated from YSU with a degree in accounting and finance. He works as a corporate finance lead for Via680 and as an Austintown firefighter.