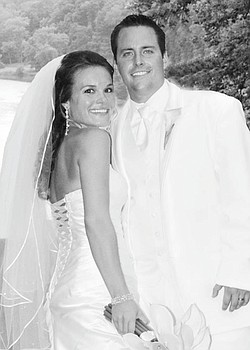 Marissa Koby and Austin Poe, both of Honolulu, were united in marriage June 19 during a ceremony that took place in Fellows Riverside Gardens, Mill Creek Park, and accepted congratulations immediately afterward at a reception in the Davis Center.

Parents of the bride are Robert and Maria Koby of Canfield, and the groom’s parents are Steve and Dawn Poe of Put-in-Bay.

The bride’s mermaid-style gown was adorned with Swarovski crystals and featured a sweetheart neckline and corset back.