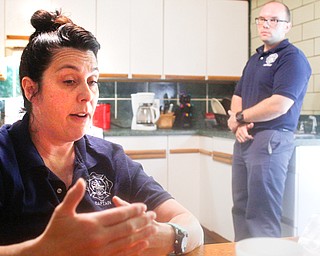 After waiting for an hour for an ambulance, Leslie Murphy was prompted by her supervisor to ask the woman who thought she was having a heart attack if she had a car. “Never in my 21-year career have I been so ashamed to be a Youngstown firefighter,” Murphy told Vindicator reporter Jessica Hardin.

More improvements are in the works.

Sweeping changes at planning commission with addition of three workers

Sweeping changes at planning commission with addition of three workers

Seven homes were destroyed by the July 20 flooding.

Stormwater run off was also addressed at the township meeting.

State auditor’s office has questioned the city’s use of $4.5 million in 2017 for economic development

About $900K is awarded for Mahoning flood relief

Mahoning County now has rights to any Utica shale deposits underneath county-owned land in Canfield, under a new lease agreement with Ohio Valley Energy approved this morning.