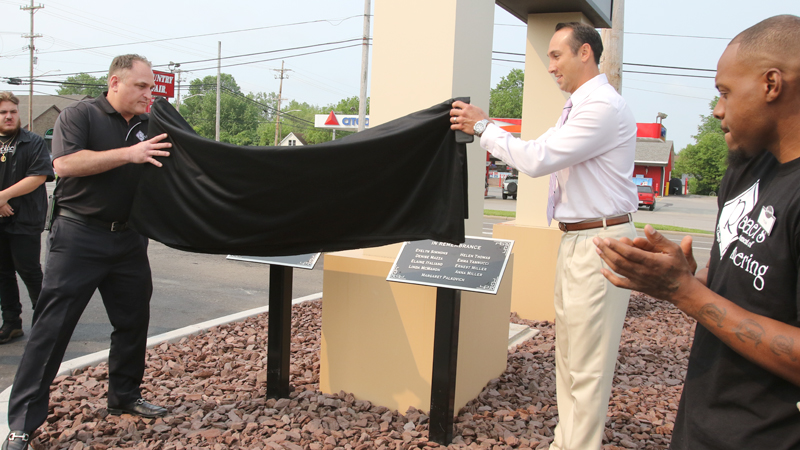 It’s been 34 years since the tornado of May 31, 1985, killed nine people in Niles on its way to killing 19 others throughout Trumbull and Mercer counties, but new plaques dedicated Friday at the former Niles Park Plaza brought back real-life recollections of that day.

Ralph Delserone, current owner of the plaza on U.S. Route 422 where many of the Niles deaths occurred, unveiled the plaques in front of a large group of onlookers. One of the plaques for the first time names all nine people who died in Niles.

An earlier tornado marker was moved from another part of the plaza to below the main plaza sign where the two new markers have been mounted. One marker says it is “dedicated in memory of those who lost their lives here in the tornado that occurred May 31, 1985.” Another marker next to it lists the nine people who died in Niles.

The markers are a blessing to Joe Italiano, whose wife, Elaine, died in the tornado. Joe, who attended the ceremony with his daughter, Julie, said he is thankful for many things, despite the tragedy of losing his wife and Julie losing her mother at age 5.

“I’m thankful my daughter is well. It is devastating being a 5-year-old to know your mom is not coming home,” said Joe, of Boardman. A key to recovering was the support of family and friends, he said, becoming emotional.

Joe and Elaine, both Youngstown schoolteachers, dropped off Julie at a home in Boardman that evening before driving to Niles to attend a spring party at a Route 422 restaurant.

There was light drizzle, and it was dark, despite only being about 7 p.m. as they traveled into Niles. They didn’t know that a huge tornado was heading up the hill of the Shadow Ridge neighborhood to their left, which was obscured by trees. Joe pulled into the plaza parking lot, thinking the worst of the storm was a distance ahead.

“It came right through us,” Joe said of the tornado. It pulled Elaine out of the car but not Joe, who found himself still in the car on a pile of rubble about 10 to 15 feet high.

“I think the reason I wasn’t pulled out of the car was because of the steering wheel. I made my way down looking for my wife,” he said. He was taken to the hospital to be treated for a broken vertebra. “They found my wife the next day,” he said.

Italiano said the number of tornadoes in recent months has given him extra occasions to reflect on the 1985 tornado. “We don’t know why we were at a certain place at a certain time, but you have to deal with reality,” he said.

Julie said she’s grateful to Ralph Delserone, owner of the plaza and its Raphael’s School of Beauty Culture, for installing the markers. “To keep the memory alive [of those who died] is what’s most important,” Julie said.

Delserone said one reason for the new markers was to include the names of the victims. “Even though this was a tragic event, it is part of our history,” Delserone said.

In addition to the nine people who died in Niles, one each died in Lordstown, Masury and Hubbard. The tornado also killed seven people in Wheatland, Pa., injured more than 500 people and caused $140 million in property damage.

Also among those attending were family members of Denise Mazza and her mother, Evelyn Simmons, who were killed when their car was picked up from a gas station on part of the plaza site; and family of Ernest and Anna Miller and Margaret Palkovich, who were killed as the tornado hit their house across from the plaza.