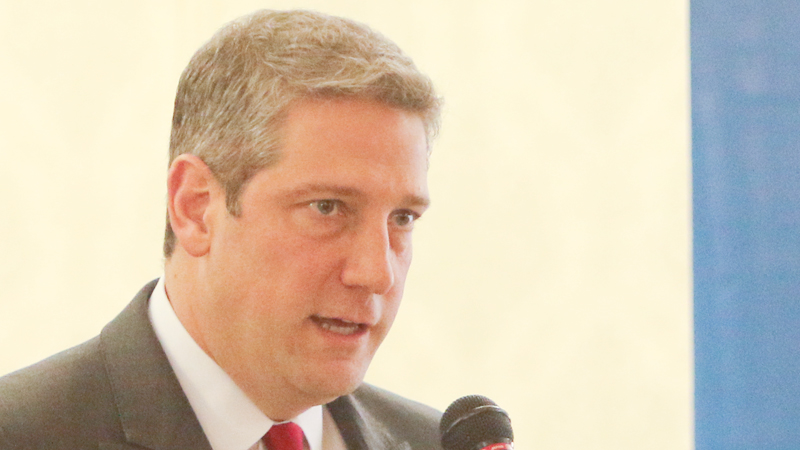 U.S. Rep. Tim Ryan, a 2020 Democratic presidential candidate, sees his Sunday town hall on CNN as a big opportunity to present his ideas and vision to a large viewing audience.

“The initial impression is people don’t know what to expect from me,” he said. “But people come away with what my ideas are and what I’ve been working on for almost 20 years in the state Senate and Congress. It’s a great opportunity to show people I’m equipped to be president and to tell people about forgotten communities and forgotten workers.”

While Ryan, of Howland, D-13th, has appeared on national television shows several times – more so since his April 4 presidential announcement – the CNN event will be different as he’ll have an hour on the cable network.

His town hall will air at 7 p.m. Sunday, sandwiched between similar events with two other presidential candidates: U.S. Rep. Seth Moulton of Massachusetts at 6 p.m. and U.S. Rep. Eric Swalwell of California at 8 p.m.

All of the town halls will be at the CNN Center in Atlanta.

Ryan said he doesn’t know where CNN is getting the people to attend the town halls.

“It’s one of those things I like to do,” Ryan said of the town hall. “I’ve done several in Iowa and New Hampshire [where the first presidential caucus and primary, respectively, take place] with small crowds showing up, asking questions. I recently did 12, 13 stops in Iowa with small groups of 10, 15, 20 people asking questions from A to Z. It’s something I’ve been doing a lot of. I like the format.”

A CNN town hall has been a regular event for Democratic presidential candidates in this election cycle. U.S. Sen. Michael Bennett of Colorado will have one tonight and be the 16th Democratic candidate to have a town hall.

After the three on Sunday, 19 of the 24 declared Democrats for president – including four who’ve been on twice – will have had town halls on CNN.

The network’s viewership for the town halls typically have been lower than its regularly scheduled programs in those time slots, particularly for lesser-known candidates.

Even so, it will be the largest audience to watch Ryan on television since his April 4 announcement on ABC’s “The View.” And unlike other appearances, it’s for a full hour with commercials instead of just a few minutes.

Ryan said the town hall will help him with “visibility, polling and fundraising. It’s my first foray into a national town-hall-style meeting.”

The first Democratic presidential debate is June 26 and 27 in Miami. The top 20 candidates will participate, with 10 candidates chosen for each day.

To qualify, a candidate needs to either have at least 1 percent support in three qualifying polls, or have at least 65,000 unique donors with a minimum of 200 different donors in at least 20 states.

Ryan has met the polling threshold, but not the donor one.

Ryan said he doesn’t know how many donors he has.

“It’s going to take more time for me to build this out with those small-money donors,” he said.

So far, 20 candidates qualify for the debate. If that number exceeds 20, those on the debate stage will be selected by a method that rewards candidates for meeting both thresholds – nine have done so – followed by highest polling average and then the most unique donors.

Ryan has a fundraiser tonight in Akron and then heads to Iowa later in the evening, staying to Saturday. Later Saturday, he’ll head to Atlanta to prepare for the CNN town hall.

He was in New Hampshire Monday and Tuesday.

Ryan also plans to run for re-election to Congress next year. Two Republicans – Duane Hennen of Warren and Lou Lyras of Campbell, who was removed last year as an independent candidate for the seat – plan to run for the House position.