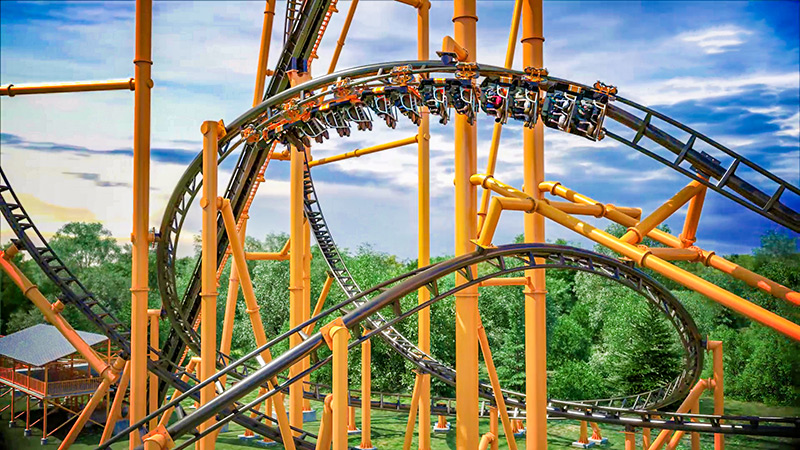 The word of the year at the region’s two major amusement parks is “immersive.”

As in “immersive” experiences, where visitors can become part of the attraction, and not merely a rider.

Major additions this season that feature immersive experiences include Steelers Country at Kennywood Park in Pittsburgh and Forbidden Frontier on Adventure Island at Cedar Point in Sandusky.

The Cleveland Browns might be riding a wave of excitement that it hasn’t seen in 20 years, but fans of the Steelers will be riding on a new roller coaster this summer that is named for their favorite team.

The Steel Curtain coaster will be the centerpiece of Steelers Country, an area of Kennywood that will open later this summer; it’s still under construction and a specific date has not yet been set.

The record-setting black and gold thrill ride will feature the world tallest inversion loop (197 feet), the continent’s most inversions (nine) and the state’s tallest hill (220 feet).

But there will be a lot more to Steelers Country than a roller coaster – and yes, it will be immersive.

The new area is designed to bring the game-day experience to park-goers. Exclusive Steelers merchandise, skill games and food locations – including a tailgating area – will create the feeling of being at Heinz Field.

Fans will be able to join in on familiar football moments throughout Steelers Country: bursting through the entry portal to the field, seeing how they measure up in practice drills, perfecting a touchdown dance, and checking scores and highlights on the giant video screen.

While work continues on Steelers Country, Kennywood guests will find updates and additions elsewhere around the park. One of the most critical advancements comes in customer service, as Kennywood is now a Certified Autism Center. A sensory guide for autistic persons is now available on Kennywood.com.

Also new this summer, Kennywood’s 4D Theater will showcase two short feature films, including a new one in “San Andreas 4D Experience.” Based on the movie of the same name, “San Andreas” is an action-packed adventure in which a rescue-chopper pilot (Dwayne Johnson) makes a dangerous journey to rescue his daughter in the aftermath of a massive earthquake. It features effects both on-screen and in-theater.

The 4D Theater is included with admission to Kennywood and will show “San Andreas” from 4 p.m. to park close daily, with “Thomas & Friends 4D: Bubbling Boilers” showing from park opening to 4 p.m.

Both films are approximately 15 minutes long.

The most important thing for Youngstown-area residents to know is that they can save $20 on the price of admission by purchasing tickets in advance at kennywood.com/ohio.

Kennywood also has a number of Pittsburgh family fun packages that combine tickets for Kennywood and its nearby Sandcastle water park, plus other premier attractions such as the Pittsburgh Zoo and PPG Aquarium, Children’s Museum of Pittsburgh, and Carnegie Science Center.

For information, including the schedule, admission prices, discount opportunities, special events and more, go to Kennywood.com.

At Cedar Point amusement park, the immersive experience gets a fresh approach at the new Forbidden Frontier on Adventure Island.

Visitors who enter the area can play as large or small of a role as they like in the interactive attraction.

Forbidden Frontier can best be described as a real-life story where the outcome is always different, depending on the choices visitors make.

The story takes place in a frontier area that has been observing a peace for five years without any outside visitors.

As guests become the first to enter Forbidden Frontier, they come across characters and situations that must be navigated.

Mental and physical challenges, group competitions and secret missions will force folks to figure out who to team up with and who not to trust.

Of course, guests can also simply sit back, grab some provisions and watch the action unfold.

In addition to Forbidden Frontier on Adventure Island, Cedar Point visitors can also immerse themselves in some new food experiences.

New dining and fun options include:

Monster Jam Thunder Alley, taking place through June 30, will bring some of the biggest and baddest Monster Jam trucks directly to fans in – here’s that word again – an immersive experience. Monster Jam will allow guests to get up close to five trucks for photos, visit the garage and even take a ride.

For information, the schedule and tickets, go to cedarpoint.com.

Waldameer amusement park and Water World in Erie, Pa., has a new ride and a new slide for the 2019 season.

Balloon Race, a spinning ride that also sweeps riders up and down, is located near the Ferris wheel.

Cannon Bowl, a two-person water slide, gives riders a centrifugal experience as they circle through a 30-foot wide bowl.

The park is open this weekend, closed Monday, and then open daily through Aug. 26, and then again Aug. 31 to Sept. 3.

Conneaut Lake Park and water park in Conneaut Lake, Pa., will be open from noon to 8 p.m. Thursdays through Sundays from June 13 through Aug. 25; it is open Saturday and Sunday only June 1-2, 8-9 and Aug. 31-Sept. 2 Labor Day weekend.