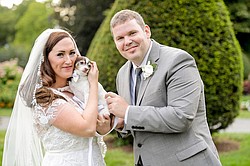 Carolyn Sweeney of Poland became the bride of Christopher Berry of Wrentham, Mass., during a wedding ceremony that took place at 6 p.m. Sept. 1, 2018, at Boston Public Garden. The officiant was Derek Anderson.

The newlyweds were congratulated at a reception at the garden.

The couple reside in Quincy, Mass., and honeymooned in Europe.

Douglas and Patricia Sweeney of Poland are the bride’s parents.

Parents of the groom are James and Susan Berry of New Bedford, Mass.

Jessica Toth was the maid of honor, and the bride’s sisters, Andrea Sweeney Wagner and Alexa Sweeney Blackann, were matrons of honor.

Groomsmen were Josh Berry, the groom’s brother, and Jeff Winters.

Nephews of the bride were the ring bearers, along with the couples’ dog.