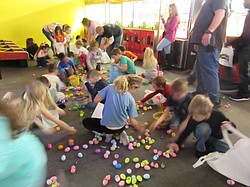 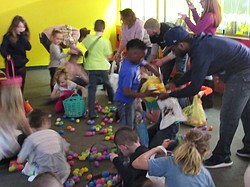 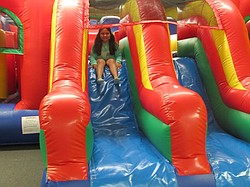 Neighbors | Jessica Harker .Alexandria Shepas slid down one of the newest additions to bounce houses at the Austintown Bounce April 20 during the annual Easter Extraviganza event. 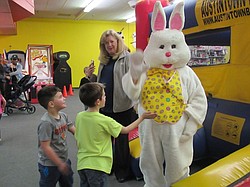 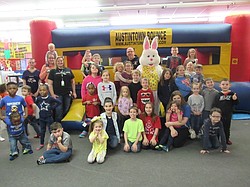 The Austintown Bounce partnered with the First American Loans to host the annual Easter Extravaganza event on April 20.

Bounce co-owner Bruce Shepas said the event has been going on since about 2010.

“It’s a great event, we like to do something for the holiday season,” Shepas said.

Age groups 4 and younger, 5-8, and 9 or older competed to collect the most eggs.

“All of us who work at American Loans have kids and it’s hard to find an event like this,” said Jessica Summers Assistant Manager of First American Loans. “This was more inclusive because you get to bounce, you get the prizes and it’s in doors.”

“It just took off from there,” Summers said. “It’s something we plan for and look forward to every year.”

Along with the egg hunts children were able to win gift baskets and every child received a goodie bag.

Sixty eggs were filled with gold coins, that when cashed in allowed a child to take home an Easter basket.

“It’s a great additional prize and it encourages them to recycle the eggs for next year,” Summers said.

She said that the baskets were donated by First American Loans community partners.

The same partners also assisted in the creation of the goodie bags, which included candy, a tooth brush, pens, pencils and more for children in attendance.

Children were also able to spend time bouncing in the many inflatables available at Austintown Bounce.

Shepas said that the facility recently got a few new inflatables, including an obstacle course.

“For people who haven’t been in in a long time, the building is going to look totally new,” Shepas said.

Austintown Bounce is located at 4317 Kirk Road in Austintown.