Ryan will have presidential town hall on CNN 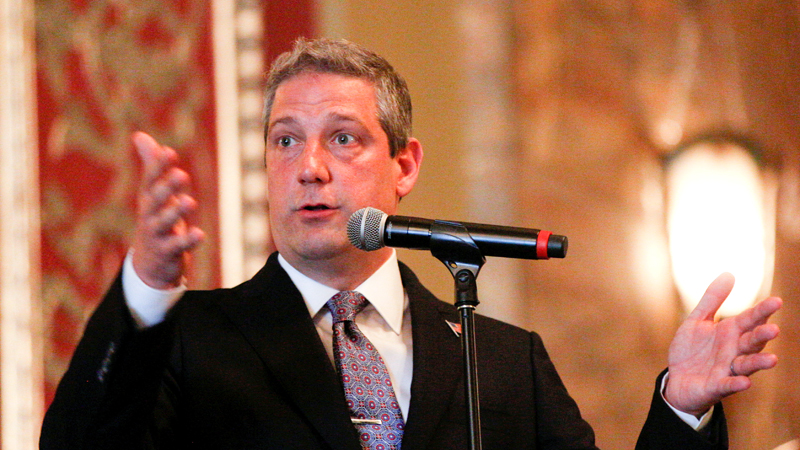 U.S. Rep. Tim Ryan, a Democratic presidential candidate, will have a town hall on CNN early next month, a campaign spokesman said.

A date hasn’t been finalized, but it will be at the beginning of June, said Michael Zetts, his presidential campaign spokesman.

The CNN press department couldn’t be reached Friday by The Vindicator to comment.

The Ryan campaign is also in talks with Fox News for a town hall on that channel, Zetts said.

Ryan of Howland, D-13th, left Friday for four days of campaign stops in Iowa, the state with the first caucus in the nation. He said he’ll campaign in several small towns and speak to about 15 to 20 people at each stop.

Ryan said he will campaign in New Hampshire, the state with the first presidential primary in the country, on Memorial Day weekend.

“The key is the early states,” Ryan said. “The key is to do well in Iowa and New Hampshire and that’s what our focus is.”

Ryan said the Democratic presidential debates are “a big opportunity” for him to get noticed by voters.

The first debate is June 26 and 27 in Miami. The top 20 candidates – there are currently 23 announced Democratic candidates – will participate with 10 candidates chosen at random for each day.

To qualify, a candidate needs to either have at least 1 percent support in three qualifying polls, or have at least 65,000 unique donors with a minimum of 200 different donors in at least 20 states.

If more than 20 candidates reach one of the two qualifications, the top 20 would be selected by a method that rewards candidates for meeting both thresholds, followed by highest polling average and then the most unique donors.

Ryan currently qualifies as he has 1 percent support in Monmouth University’s poll of Iowa Democrats, 1 percent in a national Reuters/Ipsos poll, and 2 percent in the University of New Hampshire’s poll of that state’s Democrats.

He hasn’t reached 65,000 unique donors though his campaign says he has contributors from all 50 states.

On Friday, Ryan gave the keynote address at the Comeback Capital event at the DeYor Performing Arts Center with about 300 people in attendance. The event was designed to bring the expertise of Silicon Valley together with entrepreneurs in the Midwest.

The event originated with a February 2018 Comeback Cities bus tour of five cities – Youngstown, Akron, Detroit, Flint, Mich., and South Bend, Ind. – with venture capitalists organized by Ryan and U.S. Rep. Ro Khanna of Fremont, Calif., D-17th. A similar tour through cities in North Carolina, South Carolina and Georgia was in October, as well as one earlier this week through Columbus, Pittsburgh and Youngstown.

A $2.25 million private investment Comeback Capital Fund was created for startup businesses in the cities on the first tour.

Ryan said 80 percent of venture capital is in New York, California and Massachusetts. The goal is to get that capital to invest in other states to help businesses thrive there.