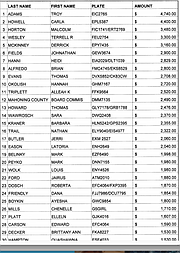 The top 60 people who owe thousands in unpaid parking tickets.

YOUNGSTOWN — The city’s clerk of courts office today released a list of the top 60 people with the most unpaid parking tickets, including lawyers, member of the local media and a car issued to the Mahoning County commissioners’ office.

The 60 owe $110,924, according to the list provided by Clerk of Courts Sarah Brown-Clark. She had overstated the figure at a Wednesday city council meeting at $150,000.

Overall, there’s about $1 million in unpaid parking tickets, with many of them written on cars downtown and near the Youngstown State University campus, Brown-Clark said.

Brown-Clark is calling for a crackdown on those who ignore numerous parking tickets. She wants council to allow police to put tire boots and/or windshield barnacles on vehicles of repeat offenders.