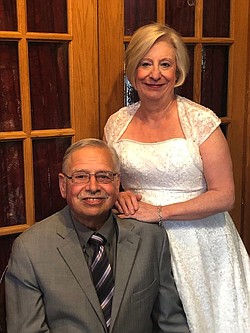 The Rev. Gary and Lynn Smith of Canton, formerly of Austintown, will be honored for their 50th wedding anniversary during a celebration and bon voyage party hosted by their family May 19 at Chateau Michele in Canton. The couple also will spend a second honeymoon in England and France.

The couple’s children are Amy (Gary) Downard, Andrew (Michelle) Smith, Aaron (Laura) Smith and Aric (Nicole) Smith, all of Canton. Their family also includes 11 grandchildren and one great-grandson, and they are expecting their second great-grandchild.

Mrs. Smith worked as an office manager at the Canton branch of Columbus Equipment Company for 25 years before retiring. She is employed as a funeral assistant at Karlo-Libby Funeral Home in Canton.

Her husband retired from ministry after 40 years of service. He works as a freelance certified funeral celebrant.