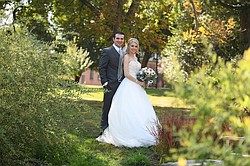 St. Mary Church in Warren was the setting at 1:30 p.m. Sept. 1, 2018, for the wedding of Danielle Lindsay and Ryan Fraelich, who were honored afterward at a reception at Drake’s Landing in Canfield.

The bride is the daughter of Jeff and Tami Lindsay of Cortland. Parents of the groom are Tim and Michelle Fraelich of Champion.

The bride wore a diamond-white ballgown designed with a sweetheart neckline and trimmed with sparkling beads. A matching veil completed her ensemble.

Andrew Capogreco served as best man, and groomsmen were Lee Beary; Dustin Lindsay and Zach Lindsay-Ward, the bride’s brothers; and Evan Mauerman, cousin of the groom. Ed Ward, brother-in-law of the bride, and James Garnet were ushers.

Mrs. Fraelich graduated from Youngstown State University with a bachelor’s degree in psychology and is an administrative assistant at the J. Arnold Wealth Management Co. in Canfield.

Her husband graduated with bachelor’s degrees in English literature and theater studies from Kenyon College. He is a sales manager at Dillard’s in North Olmsted.

After a honeymoon in Walt Disney World in Orlando, Fla., the couple reside in Newton Falls.