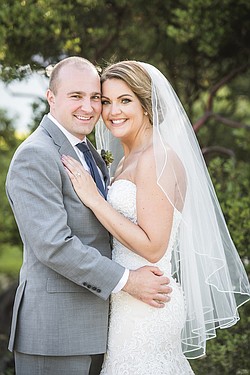 Mr. and Mrs. George Jonda are making their home in Pleasanton, Calif., after exchanging wedding vows at 5 p.m. April 27, 2018, at Wente Vineyards in Livermore, Calif. The newlyweds were then honored during a reception.

The bride, the former Danielle Guntle, is a daughter of Jennifer and Roger Condiff and Linus Guntle, all of Centerville. Parents of the groom are George and Joyce Jonda of Boardman.

Lindsey Speakmon served as matron of honor, and Jessica Lalich, sister of the bride, was maid of honor. Bridesmaids were Jill Jonda, the groom’s sister; Abby Bunosky, cousin of the groom; and Emily Lea.

Mr. Jonda graduated from OSU with a bachelor’s degree in construction management and earned a master’s degree from Capital University. He is a project manager for Automated Engineering Systems in the San Francisco Bay area.

The couple honeymooned in Greece.