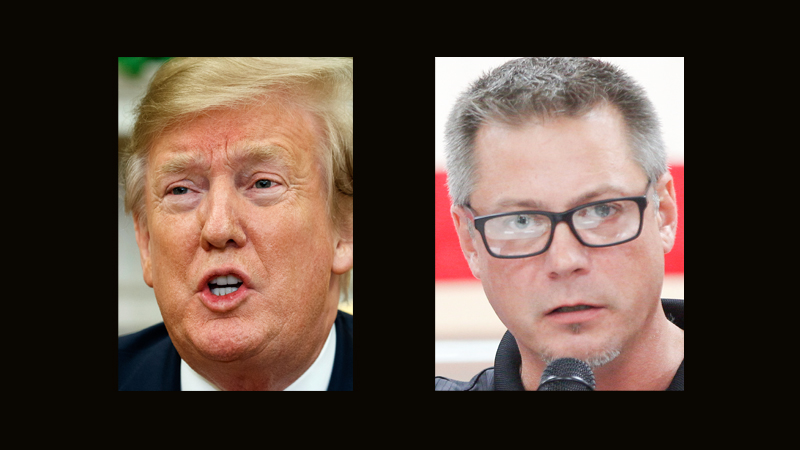 Only one of the 21 voicemails left for Dave Green, president of United Auto Workers Local 1112, was negative.

Considering the previous day the president of the United States publicly criticized him and insinuated that one of the worst economic tragedies to befall the Mahoning Valley is his fault, things could have been worse.

“I’m not mad at the president,” Green said Monday at the UAW hall in Lordstown. “He didn’t idle the plant and neither did the UAW. Right now we’re just focused on getting GM to send us another product.”

If Green had any desire to fire back at President Donald Trump, he managed to keep it under wraps. But he’s glad for the attention the tweets brought to the plight of the Lordstown workers.

Green was a guest on CNN’s “Erin Burnett Out Front” segment Monday night as Trump’s weekend tweet storm was addressed.

“I just want to make sure that I don’t get into a word war here with the president,” Green said, adding later: “I don’t think he knows me very well. ... I continue to work every day tirelessly to get some product here.”

Green said the plant workers are torn between leaving the Valley or waiting out a final decision about the plant’s fate. “They’re [GM] saying its unallocated [no new product] so it’s a very strange place to be for our members,” he said.

Green said the president needs to recognize how important the Lordstown plant is to a community where people are struggling economically, and that “we couldn’t agree more” with the need to bring work back to the U.S.

Beto O’Rourke, former U.S. representative from Texas and a 2020 Democratic Party presidential candidate, also did a more than six-minute live-streamed interview on Facebook with Green at the UAW hall Monday. O’Rourke, who was in Cleveland campaigning, drove to Lordstown to talk to Green about the local effort to get another product at the plant and praised the union president for fighting to keep automaking jobs here.

The presidential tweets came less than two weeks after the Valley was rocked by the closure of the Lordstown facility – and associated companies – that built the Chevrolet Cruze.

An economic study by Cleveland State University estimates the March 6 plant idling will have a more than $3 billion impact on regional industry.

A day after the series of weekend tweets, Trump was at it again Monday.

“General Motors and the UAW are going to start ‘talks’ in September/October,” the tweet read in part. “Why wait, start them now!” It continued: “Get that big, beautiful plant in Ohio open now.”

Trump also posted two weekend tweets on the subject. One criticized Green and a second was aimed at GM CEO Mary Barra.

In response, the UAW tweeted: “Corporations close plants, workers don’t. Join us, @RealDonaldTrump in leaving no stone unturned against @GM. Don’t let GM off the hook.”

“Buffalo” Joe Nero supports Trump, but disagrees with the tweets aimed at Green and the union.

“He’s wrong about Dave Green and the union. Dave is a stand-up guy. He’s done nothing but try to support us,” Nero said. “Trump doesn’t understand how bargaining works and what our union has already given up during negotiations.”

Nero, 61, has 42 years with the company. He visited the union hall Monday afternoon to get information on transferring to another location.

Nero has spent the majority of his career chasing GM jobs across the Rust Belt. This will be his fifth layoff while employed by GM, and – if he’s offered a position – his sixth transfer. He’s traveled from Buffalo to Pittsburgh to Mansfield and finally to Lordstown.

While Nero will be the first to tell you he doesn’t agree with everything his company or even his union does, he made it clear he couldn’t overlook Trump’s comments toward Green. “I’ve been talking all morning. I can’t keep my opinion to myself, not with what’s been said about Dave Green,” he said.

Tim O’Hara, UAW Local 1112 vice president, said he thought sticking to the statements released by the Drive It Home Ohio campaign responding to the tweets is in the union’s best interests.

“I don’t know that it’s productive if we get into the mud with Trump,” O’Hara said. “We just want to focus on getting another product here.”

Speaking for the Drive It Home campaign, James Dignan, its co-chairman and Youngstown/Warren Regional Chamber president and CEO, said, “We agree with President Trump’s comments. GM should bring another product back here so we can deliver a quality vehicle for them once again with three full shifts here at their Lordstown facility.”

When asked about Trump’s Lordstown tweets, specifically the ones that mention Green and Barra, Dan Tierney, Gov. Mike DeWine’s spokesman, declined to comment.

Thomas McCabe, Mahoning County Republican Party chairman, said he’s glad Trump is “keeping it to the forefront. It’s good we keep talking about Lordstown” and “I’m glad the president is paying attention to that.”

Regarding Green, McCabe said he thinks the UAW local president has “done a good job overall. ... I think he’s a good guy.”

When asked about Trump’s tweet about Green, McCabe said: “Donald Trump loves his Twitter and his tweets. Maybe the tone was unwarranted, but I’m glad he knows who Dave Green is.”

State Sen. Michael Rulli of Salem, R-33rd, said: “By the president doing what he did I believe something is going on [with Lordstown]. ... The worst thing is people don’t talk about it. ... I think something happened. You wouldn’t see a tweet storm like this over nothing.”

Rulli said, “The rhetoric was a little rough on [Green]. He wants this plant to succeed.”

Lordstown Mayor Arno Hill said he didn’t like the negative comments the president made about Green, but at least he knows the president is focusing his attention on the plight of those affected by the end of production in the village.

Hill had a call Monday from the White House Office of Governmental Affairs and was told the president “hasn’t forgotten you” and “realizes what’s going on.” The staffer wanted to make sure Hill, a Republican, was aware Trump had been tweeting in the last few days about GM’s decision to idle the plant.

Hill said he’s giving some thought to making a trip to the Canton area Wednesday, where the president will attend a fundraiser. He said he’d tell Trump: “Hey, if you can get them to the table and get an agreement that would be great.”

GM has said the future of the GM Lordstown plant will be decided in talks coming up between the automaker and the union this summer. But Hill is encouraged the president is trying to get talks started sooner.

Hill said he gives Trump a “B” grade so far. ”If he gets them back to the table, then he’s accomplished something,” Hill said. “I’ll give him a B-plus. If he gets a product, I’ll give him an A.”

State Rep. Don Manning of New Middletown, R-59th, said, “I wish I knew what the president was thinking. I don’t think it was meant to be a negative slam [at Green]. It’s a little more innocent. We’ve got one of the greatest workforces in the country.”

U.S. Rep. Bill Johnson of Marietta, R-6th, said, “I know the president is passionate about putting the people at Lordstown back to work. I’ve met with Dave Green, and he’s working hard on his end. The bottom line is everyone in the Mahoning Valley is doing what they can to ensure the best possible outcome for all the hardworking Ohioans affected.”

But U.S. Sen. Sherrod Brown, a Cleveland Democrat, said Trump’s comments are disgraceful. “Local 1112 President Dave Green has done nothing but fight for workers in Lordstown, while the president has made lots of big promises and failed to stand up for workers at every turn.”

He added: “Instead of fighting to save these jobs, President Trump decided to side with corporations and give companies like GM massive tax breaks to shut down American factories and ship jobs overseas.”

Mahoning County Commissioner David Ditzler said he was “taken aback” to hear the president take aim at Green, considering the union leader has refrained from partisanship with regard to the plant.

“Green has always initiated everything in all of his talks – ‘we’re not Democrats or Republicans,’” Ditzler recalled. “It seemed as though Trump was working on Lordstown’s behalf with the things he’s been saying publicly – that he was talking with Mary Barra. It seemed, in his own way, he was moving in the direction we all wanted him to on behalf of the Valley.”

Several customers in Nese’s Country Cafe on Salt Springs Road said they support Trump more than union officials. They think his recent tweets on the shuttered GM plant might have an impact.

“I hope he gets something in there,” Mary Lou Stone of Braceville said. “With his mouth, I think he will get something done.”

Her daughter, Trish Christy, chimed in, “I think he waited too long.”

Joseph Denno of Warren, who was eating lunch with his mother, said he has been a business owner 30 years and has always believed it was his responsibility to make sure his dog-grooming company ­– not the government – provides what his customers want.

“I don’t think it’s Trump’s fault they went with the wrong vehicle,” he said of GM.