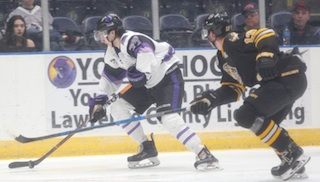 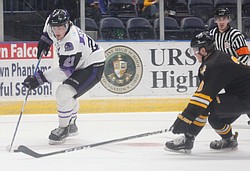 Urup just needed to be in position and finish the play. He was successful on both ends to put the Phantoms ahead in the middle of the third period in a 5-3 victory over Green Bay on Saturday night at Covelli Centre.

Jack Malone took a pass from Brett Murray and sent the puck to Urup, set up at the back post, and he knocked it in for a 4-3 Youngstown lead with 13:21 to play in the third.

“Jack had it down low and I creeped to the back door,” Urup said. “He saw me. It was a great pass and I tapped it in for the one-timer. I just shot right away. I tried to get it up in the air a little bit.”

Ben Schoen added an insurance goal on an assist from Josh DeLuca with 11:05 to play to complete a three-goal third for the Phantoms (26-18-1-4) in a come-from-behind victory.

“Any time you’re down, you’re battling to back not only on the scoreboard, but to get the momentum and push forward,” Phantoms coach Brad Patterson said. “We had some great execution on those goals and you need that against a goalkeeper of that quality.”

Connor McEachern knotted the score at 3 on a one-timer with assists from Trevor Kuntar and Thomas Farrell just 51 seconds into the third.

“We just started to do things more simply,” Urup said. “We stuck with it and tried to shoot the puck more.”

Green Bay’s Noah Prokop and Luke Mylymok scored to close the first 20 minutes tied at 2 and Benito Posa added a goal in the second in the to take a 3-2 advantage with 4:24 left in the period.

“I thought their transition game was good,” Patterson said. “They won from the five-minute mark of the first partway into the second. They won the 50/50 pucks. They won the footraces and generated momentum.”

Craig Needham netted a goal 24 seconds into the contest on assists from Arseni Smekhnov and Nikolai Jenson, but play was halted for several minutes afterward as the result of some faulty glass along the boards.

“I agree [it cost us some momentum],” Patterson said. “But at the same time, you can’t look at that. They’ve seen that happen and can’t use it as a crutch. It was a great start, but not just because we got the two goals. We played simple. Once we got the lead, we weren’t willing to do that.”

Liam Dennison added the Phantoms’ second goal on assists from McEachern and Murray with 17:57 to go in the opening period.

The Phantoms and Gamblers meet again at 5:05 p.m. today.