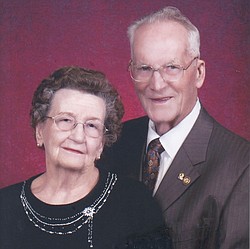 Dan and Shirley King of North Jackson will mark their 75th wedding anniversary Tuesday during a family celebration at Antonine Village.

Mr. King and the former Shirley Davis were married March 12, 1944, at an airforce base chapel in Eagle Pass, Texas.

Mrs. King was a homemaker. Her husband was a general foreman at U.S. Steel in Youngstown before retiring in 1978. He served in the U.S. Army Air Corps and was a prisoner of war.

The couple are members of Lordstown Christian Church.