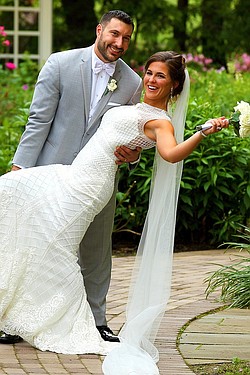 Chorbishop Michael Kail heard the exchange of vows between Victoria Farris and Daniel Antonucci during their wedding at 1:30 p.m. June 1 at St. Maron Church in Austintown.

After the newlyweds were honored at a reception at Mr. Anthony’s Banquet Center in Boardman, they honeymooned in Sandals Ocho Rios, Jamaica. They reside in Poland.

Laura and John Farris of Poland are the bride’s parents. The groom is a son of Kathleen and Randall Antonucci of Hubbard.

The bride wore a sheath gown of intricate lace combined with detailed beading. An illusion neckline and sheer back with buttons were complimented by a lace, sweep train. The crystal-lined veil completed her ensemble.

Ava and Carmella Farris, cousins of the bride, and Cameron Dravis, the groom’s cousin, were flower girls.

Mr. Antonucci graduated from YSU with a bachelor’s degree in engineering. He is a civil engineer at Duquesne Light Co. in Pittsburgh.