Ryan was ‘frustrated’ during debate 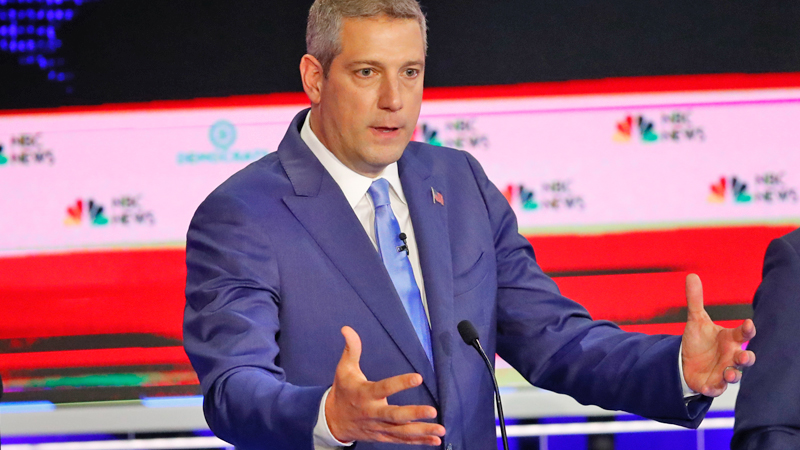 U.S. Rep. Tim Ryan said he felt “frustrated” that the moderators virtually ignored him during more than half of the initial 2020 Democratic presidential debate, but became more comfortable as the event went on.

Ryan of Howland, D-13th, said he decided to be more assertive during the latter part of the debate.

“It was frustrating, no doubt about it, especially in that first hour,” Ryan told The Vindicator Thursday, the day after the debate. “I felt I needed to be more aggressive in the second hour. It’s a balancing act of trying to be aggressive and assertive, but not too aggressive. You don’t want to turn people off or come off as a jerk. I think I came across well.”

Ryan said he started the debate “a little bit” nervous, but “I was a little less nervous than I thought I’d be. Then you get going and the nerves go.”

Ryan said he tried to respond to a statement from U.S. Sen. Elizabeth Warren of Massachusetts – the presidential candidate with the highest polling numbers in Wednesday’s debate – about eliminating private health care.

“I couldn’t get in there,” he said. “It could have been a moment contrasting myself with Elizabeth Warren on health care.”

The moderators asked Warren more questions than any of the other candidates on the stage. Ryan ended up speaking for a total of 7 minutes and 12 seconds, the sixth most of the 10 candidates, according to National Public Radio.

His most notable moment came during a tense back-and-forth with U.S. Rep. Tulsi Gabbard of Hawaii regarding troops in Afghanistan.

On Thursday, Ryan said Gabbard “was trying to manipulate what I was saying.”

During the debate, Ryan said the United States has “to be completely engaged” in Afghanistan and elsewhere “because these flare-ups distract us from the real problems in the country.”

Gabbard – who enlisted in the Hawaii National Guard and served in Iraq in 2004 and 2005 – said: “Is that what you will tell the parents of those who soldiers who were just killed in Afghanistan? ‘Well, we just have to be engaged.’ As a soldier, I will tell you that answer is unacceptable.”

Ryan said he didn’t “want to be engaged,” but “the reality is if the United States isn’t engaged, the Taliban will grow and they will have bigger, bolder terrorist acts.”

He later said that “when we weren’t in [Afghanistan, the Taliban] started flying planes into our buildings.”

Gabbard responded: “The Taliban didn’t attack us on 9/11; al-Qaida did. That’s why I and so many other people joined the military: to go after al-Qaida, not the Taliban.”

Ryan then said the Taliban was “protecting those people who were plotting against us.”

He is correct as the Taliban harbored al-Qaida, including its leader Osama bin Laden, before 9/11.

When asked Thursday about the exchange, Ryan said Gabbard is “wrong. It’s that simple. I’m not for letting terrorists organize in Afghanistan like the Taliban did with al-Qaida. She obviously has some poor judgement as well as she met with [Syria’s Bashar Al-]Asaad after he gassed children.”

Ryan said: “We have to engage. If we don’t it means the Taliban taking over like they did with 9/11.”

He added: “Whoever got that question, she was going to go after and make her point. She tried to make it sound like I don’t know, but I do.”

An attempt Thursday by The Vindicator to contact the Gabbard campaign to comment on Ryan’s statements was unsuccessful.

Mandi Merritt, a Republican National Committee spokeswoman, said Ryan’s exchange with Gabbard “earned him the biggest blunder of the night.” She added that Ryan “misfired, coming in at one of the worst debate performances of the night.”

Ryan said overall he was pleased with his debate showing.

“I came across as the person who understands working-class people and middle America,” he said. “People love the message. It will resonate across the country.”

Ryan spent Thursday doing a number of media interviews including appearances on CNN and MSNBC.

Instead of having 20 candidates in groups of 10 each over two nights, Ryan said he’d prefer debates with six or seven candidates a night for three nights as that would give each candidate more time to talk. But he acknowledges that’s not going to happen.