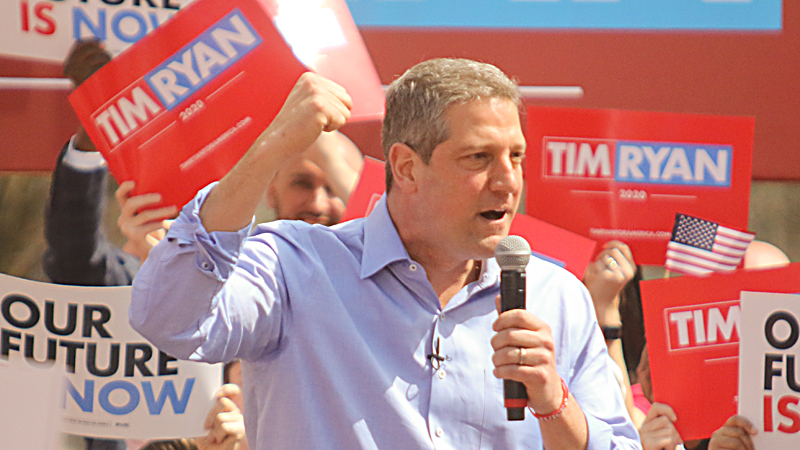 Ryan of Howland, D-13th, will share the stage with nine other presidential candidates during the 9 to 11 p.m. debate in Miami. A second group of 10 Democratic presidential hopefuls will debate Thursday. The debates air live on NBC, MSNBC and Telemundo.

“You’ve got to get people interested in the campaign,” he said during a Tuesday interview with The Vindicator. “My biggest challenge is my name ID isn’t as big as other people. But at the same time I’m polling the same as people with much higher name ID. There are people who are learning about me.”

Ryan has served longer in elected federal office – he’s in his ninth two-year term in the U.S. House – than any of the other candidates on stage with him tonight.

“People don’t know I’ve been in Congress that long,” he said. “I want to let people know I’m not some newbie. I’ve thought about this stuff for a long time.”

Ryan will stand second from left with de Blasio at the far left and Castro to Ryan’s right.

Ryan said he wants people watching the debate to leave with this impression of him: “I really like this guy. This guy is in my top three or four.”

He added: “You want to get people interested. You want people to see me and hear my message.”

The debate format will allow participants up to 60 seconds for answers and no more than 30 seconds for follow-ups. There will be closing statements but not opening ones.

“I’ve got my team prepping me with questions,” Ryan said. “I’m trying to be as prepared as possible. But try to answer a question in a minute about Iran. [laughs] ‘Go, you’ve got 60 seconds. What do you think?’”

Ryan said he hasn’t “passed judgement” on the debate format, but said he would have preferred six or seven candidates a night over three nights.

To qualify for the debates, a candidate needed to either have at least 1 percent support in three qualifying polls or have at least 65,000 unique donors with a minimum of 200 different donors in at least 20 states. Of the 20 candidates, 14 met both qualifications.

Ryan met the polling threshold with 1 percent in at least four polls and 2 percent in a University of New Hampshire poll of that state’s Democrats, but not the donor one.

The top 20 candidates under the same thresholds will debate again July 30 and 31 in Detroit with 10 candidates using the same random selection process for each night as the Miami debates. To date, 21 candidates qualify for the Detroit debates, but Ryan so far is safe as his 1.33 percent polling average – thanks to the New Hampshire poll – is higher than five other candidates.

The bar is higher for the third and fourth debates in September and October. To get into those debates, a candidate needs at least 2 percent support in four qualifying polls between Friday and Aug. 28 and contributions from at least 130,000 unique donors with a minimum of 400 different donors in at least 20 states by Aug. 28.

When asked about qualifying for future debates, Ryan said, “I don’t talk much about it, but one step at a time.”

Ryan will have a fundraiser Friday at the Chicago concert at the Youngstown Foundation Amphitheatre.

He will discuss his education agenda Monday at the American School Counselors Association’s annual conference in Boston and then campaign in New Hampshire, the state with the first presidential primary, for a couple of days. Ryan speaks July 5 at the National Education Association’s national meeting in Houston.