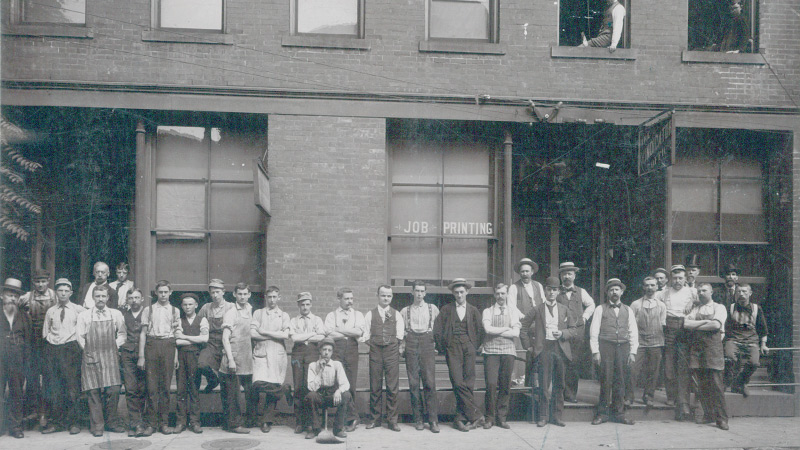 On June 25, 1869, the first edition of the Mahoning Vindicator, a new weekly that called for the “speedy triumph” of Democratic Party principles and the rescue of government from the grasp of its “imperialistic assassins,” was published.

The four-page newspaper was filled with several unusual articles primarily from out of the area – a dentist in Weymouth, Mass., who reinserted the teeth of a boy who had them kicked out by a horse, a couple of strange wedding stories, and a tale of a farmer with two sons: “an early riser” and the other “an incorrigible sluggard” – along with information that the week’s fire losses were $11,650, German Catholics had bought a lot at Wick and Rayen avenues for a church and the Mahoning River was high.

It also had a lengthy plea for women’s rights written by “Cherry Blossom,” not likely the writer’s real name.

And the weekly sold for $2 a year.

It was a colorful start to the newspaper that would compete with other publications in the area to become Mahoning County’s only daily and will celebrate its 150th year of publishing this week.

The newspaper was first published by James H. Odell, who came from Beaver County, Pa., where he was “an aggressive writer, very severe on political friend and foe alike when not in accord with his views, and in consequence he was continually in trouble and kept his party in turmoil when his political enemies were not at fever heat over his utterances,” according to the “History of the Newspapers of Beaver County, Pennsylvania.”

He once published a newspaper there while in the county jail, and legend has it he was run out of Beaver County for offending Republicans with his staunch Democratic Party positions and came to Youngstown, where he named the newspaper believing he had found vindication here. It’s curious he came to Youngstown as it was a strong Republican city as was most of the North after the Civil War.

“A lot of newspapers were affiliated with political parties at the time,” said H. William Lawson, executive director of the Mahoning Valley Historical Society.

The newspaper changed hands a number of times before William F. Maag Sr. on Dec. 22, 1887, purchased The Vindicator nameplate and remnants of its North Phelps Street print shop that was destroyed five months earlier in a fire. Maag had attended the auction as a spectator with no plans to buy the newspaper. But his opening bid was the only one and he became its owner.

Maag was already owner of the German-language Rundschau (Review) and would continue to publish it until 1919.

The Vindicator – ranked among the top 20 newspapers in the nation in length of continuous family ownership – became a daily Sept. 23, 1889.

“It’s remarkable throughout its 150 years it’s had local ownership,” Lawson said. “It’s a rare commodity in the newspaper business. We see newspapers becoming endangered species. It’s important for our community to be informed.”

The Vindicator was among the first newspapers in the United States to publish a black-and-white photograph in 1893. Previous to that, the newspaper relied on hand-drawn illustrations.

Under Maag Jr.’s leadership, The Vindicator, which had fought the Ku Klux Klan for years, became the only daily newspaper in Youngstown when he purchased on July 2, 1936, The Telegram, which backed the KKK, from Scripps-Howard.

The public had objected to The Telegram’s support of the KKK as well as the trial of top executives of that newspaper for padding circulation and defrauding advertisers.

Brown died Aug. 14, 1981, with his widow, Betty J. H. Brown Jagnow, becoming publisher and president – positions she holds to this day – and their son, Mark A. Brown, named general manager, a position he still has.

“Having worked here for 71 of my 88 years, I am thrilled to be here to see the 150th anniversary of The Vindicator,” Brown Jagnow said. “I cannot imagine not coming to work every week. Through the decades working here, I have known many wonderful people. Of course, Mr. William F. Maag Jr. stands out. I remember trying to avoid passing him on the stairs in the old building. I always seemed to meet him on the second floor landing where the window was open since there was no air conditioning here in the 1950s. He would always say hello while backing up toward the window and tipping his head downward. I was so afraid he would fall out of the window because of me.”

She said she initially didn’t want to work at the newspaper, but is glad she did.

“I was working as a church secretary when my minister grabbed my arm and said, ‘Come with me,’” she said. “He said he wanted me to work where there were good people that he knew and trusted. As he drove me to The Vindicator for an interview, I argued and complained the whole way there. As it turned out, he knew best.”

Mark A. Brown said his father “tried to steer me to other careers.” But, he said, “All I ever wanted to do was go to work with him at the paper. I thought he was the kindest, most compassionate, yet quietly the strongest man on the face of the earth. I spent weekends in the office with him through middle and high school. I admired the ethics and dedication to the staff and work that I witnessed on Saturdays and Sundays by dad and his longtime friend and advertising director, William G. ‘Bill’ Mittler.”

Brown added: “I am proud of the truly exceptional work and resulting community good done by the employees of The Vindicator over the decades. From the early years of fighting the KKK even while the Klansmen burned crosses and stood with rifles across from the family’s home in Boardman to the near constant battles against government corruption and the mob which continued through my tenure. And from the heartful features done by Janie S. Jenkins years ago to the stories of everyday people battling illnesses and disabilities and the inspiration they are to all of us. The highlight of everyday has been knowing I was going to work with some of the most dedicated and good people around.

“This 150th anniversary brings back many memories from the relatively few 38 years I have had the privilege to work here alongside of my mother.”

Todd Franko, the newspaper’s editor the past 12 years, said: “I think life is buoyed by several precious commodities – one being light. In a way The Vindicator is light for so many things in our region. While we engage many important aspects of our Valley, often it’s the simplest things I value most in what we do – like local theater profiles, weddings and fish fry listings.”

Franko said: “It is humbling to think we have been happening for 150 years and have been a witness for the region’s entire modern history.”

Monica Nieporte, president and executive director of the Ohio News Media Association, said: “The Vindicator has proudly served Youngstown and Northeast Ohio residents for 150 years. The Vindicator has, for decades now, held a unique role in the community as the hub of information about local news, sports and commerce.”

She added: “I am optimistic that The Vindicator will enjoy the continued support of local residents and the business community so it can thrive in this currently challenging media environment and will be able to be the hometown news source for many more generations of Vindicator readers.”