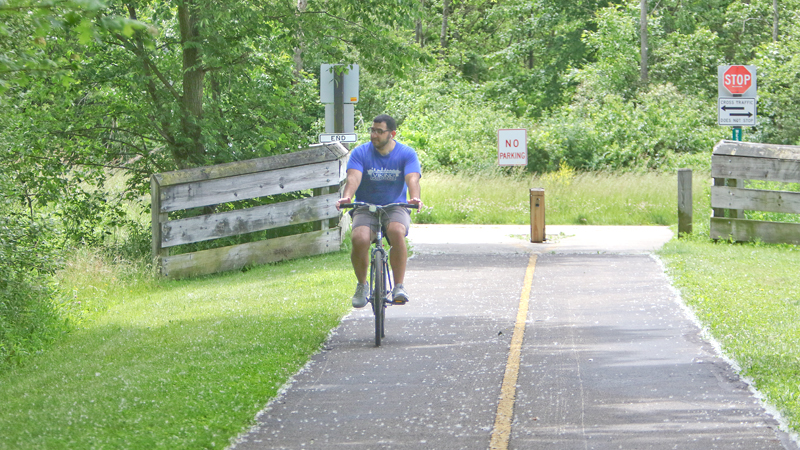 Avery is now in his 31st year with the parks. He’s been focused on one local aspect of the Greenway project – MetroParks Bikeway – since 1989.

The 100-mile Greenway, about 80 percent of which is already built, would connect Lake Erie to the Ohio River through four counties, beginning at the lake in Ashtabula County, spanning Trumbull and Mahoning counties, then ending at the river in East Liverpool in Columbiana County.

Avery recalled “ugly” public meetings during the initial development phases of MetroParks Bikeway 19 years ago – which became the first of its kind in the Mahoning Valley, and is part of the proposed Greenway – as people argued “It’s going to go past my house. I don’t want crime, I don’t want vandalism.”

Now they say, “Don’t you dare take that bikeway away from us.”

About $4.5 million in MetroParks funding has been spent or earmarked for the third phase of the project, which spans 6.4 miles in Mahoning County – about 4.6 miles of which the MetroParks is working to acquire through eminent-domain lawsuits, the first of which were filed in November 2017, or other legal means.

The proposed trail would cut through 20 parcels privately owned by 13 property holders, only one of whom has already allowed the MetroParks to acquire the land.

Others have said they’ll cling to their property – some of which carries generations of family history – or reject a public thoroughfare in their backyard.

A counter placed near the Herbert Road portion of the Bikeway between 2017 and 2018 marked about 88,000 hikers or bikers over the course of that year, said Justin Rogers, the MetroParks’ planning manager. Young added that number would likely be doubled had the counter been placed near the Kirk Road trailhead.

Young said the bikeway and Greenway extension could become an everyday transportation network for the communities it spans. Several spur connections have been developed since the project began, including three housing developments. In other communities, people take bike trails on their work commute, Young added.

Those fighting the MetroParks acquisitions said they question why the Greenway’s third-phase plan avoids Washingtonville Road, which is less than a mile from the proposed route and is already part of the bikeway.

Young said a feasibility study conducted in 1996 identified four alternative routes for the Greenway’s third phase, the best of which puts the trail through private property.

Of those weighing in on the Greenway proposal after a 2012 public open house, more than three-quarters were in favor, “with many expressing excitement for this portion of the trail,” Young said. It was the same after a 2016 open house, he said.

Those drafting “supportive” emails for the Greenway told Young the vocal opposition doesn’t speak for them, he added. Privately, trail supporters are urging them on, he said.

“To those people, I hope they see the benefit,” Young said.