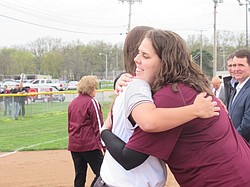 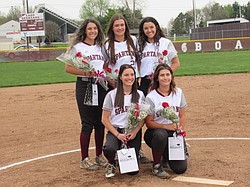 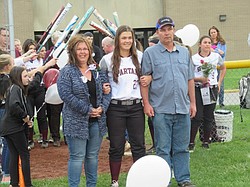 Neighbors | Jessica Harker.Senior member of the Boardman softball team Brooke Hoffman walked onto the field escorted by her parents for the team's annual senior night. 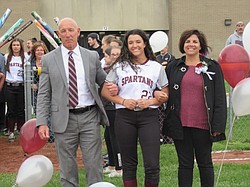 Neighbors | Jessica Harker.Boardman superintendent Tim Saxton and his wife walk their daughter, Ashley Saxton, onto the field during the softball team's annual senior night on April 29.

Boardman softball players celebrated the end of their final year during the team’s annual senior night on April 29.

Players were escorted onto the field by their parents, and received gift bags and flowers from their fellow teammates.

The entrance to the field was decorated with maroon and white balloons to match the teams colors.

All five graduating seniors have been playing softball together in Boardman for six years.

Kevin Tarascewski, the father of one of the graduating seniors and the head of the softball booster club, said that the group raised more than $9,500 for the renovations.

“We have an active and very helpful membership that really steps up and helps. Be it shoveling material into a wheel barrow or soliciting sponsorships for our Night at the Races,” Tarascewski said.

He explained that the booster club planned to do the renovations since last year, but had to wait till the nicer weather to install it.

Renovations included the installation of a new substrate to help with drainage for the field, along with other changes.

“This way the field will be able to be used more often, even after poor weather,” Tarascewski said. “It will also last much longer.”

It took the group two weekends to complete the changes, and have the field ready for the senior night game.

“We do a lot of fundraising to raise the money for the fields,” Tarascewski said. “We have a lot of community support.”