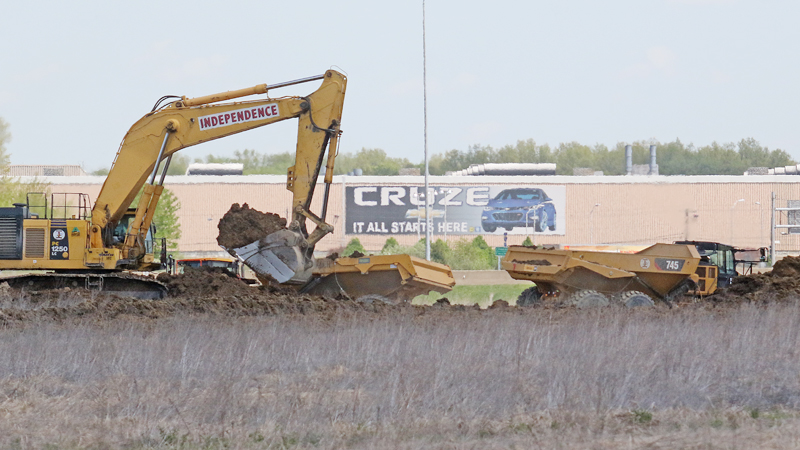 Trumbull County Commissioner Mauro Cantalamessa said there will be a resolution on the commissioners’ agenda next week supporting local laborers in their efforts to be part of the work force building the TJX HomeGoods warehouse in Lordstown.

He said the commissioners are also likely to try to incorporate the laborers’ wishes in future tax abatements they approve for such projects following comments from union leaders at a meeting Wednesday.

“One of our first priorities is economic development,” Cantalamessa said, adding there has to be a balance between the wishes of companies and labor unions.

Jim Taylor, business representative for the Painters and Allied Trades union in Girard, was among labor leaders who spoke to the commissioners Wednesday.

He said contractors have advised union leaders who the companies are that will apparently handle iron work, concrete finishing and general contracting at the site. The companies named — one from Georgia — are not likely to hire many local laborers, Taylor said.

In a statement, HomeGoods said it is too early in the process to discuss who the contractors are that will construct the facility.

“We remain very excited about this project and continue to believe it will be mutually beneficial to the people of Lordstown, the broader Mahoning Valley, and HomeGoods,” said Doreen Thompson, a HomeGoods spokesperson.

“Our work thus far has been focused on clearing the property, work which we have been conducting with a site contractor located in Ohio. As it is early in the construction process, we are not in a position to confirm additional information at this time.”

Because Lordstown Village Council and the county commissioners granted TJX a 75 percent, 10-year tax abatement for the project, the public has a right to expect local residents to be part of the project’s work force, Taylor said.

Cantalamessa said the commissioners are working to determine what language can be used in future abatements, such as requiring a certain percentage of workers to be local.

Cantalamessa said it’s clear the language “needs to be stronger” than what was used in the HomeGoods abatement, known as an enterprise-zone agreement.

“What we’re seeing more and more is seeing people from outside our communities coming in to work, taking those dollars outside the community,” he told The Vindicator following the meeting. “

“My concern is those people are going to take all that money out of this community, when you could hire local people that are going to be buying groceries and jeans,” DiTomasso said. “Instead, you’re going to have someone staying in a hotel.”

Mahoning County Commissioner Carol Rimedio-Righetti said if TJX site workers are, in fact, being hired from outside the community, local union workers have “a legitimate complaint.”

“I agree with them. ... People should be given the opportunity to get the work locally, if there are contractors here who can do that work, and that they should pay a wage that’s fitting to that job,” she said.

“We’ve lost so many jobs in the last — not even a year. They should be looking at hiring people from Mahoning County [and] Trumbull County.”

Lordstown Mayor Arno Hill, meanwhile, said he has advised union leaders who have contacted him that he does his best to “bring jobs into the village. I don’t have anything to do with who gets hired for construction purposes.”

Village council approved the enterprise zone agreement for the HomeGoods project before the commissioners did, but the county writes such agreements, Hill noted.