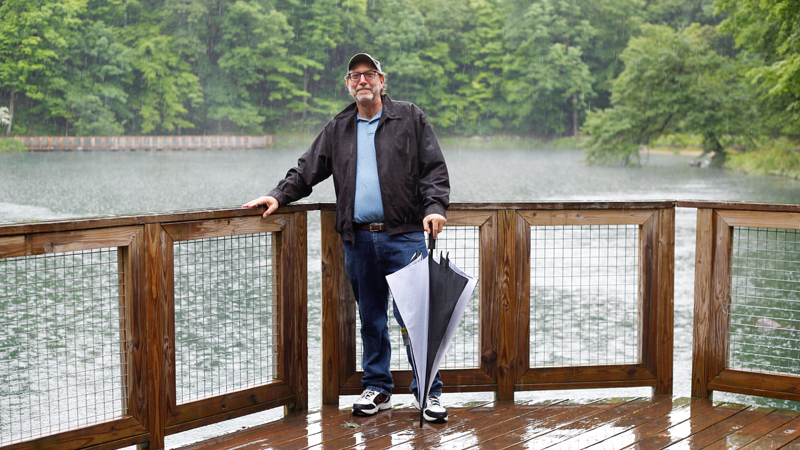 In the summer, ponds can stratify into two layers: a warmer upper layer and a colder lower layer devoid of oxygen. When something disrupts this system, oxygen is displaced, depriving fish.

That’s what happened in July 2013, when heavy rains mixed the pond’s layers and resulted in dead fish floating in the pond.

The Lily Pond, second only to Fellows Riverside Gardens in park attendance, is one of the park’s crown jewels.

“People have been coming for generations to see the pond,” said Nick Derico, natural resources steward at Mill Creek MetroParks.

Murray Davis, former chairman of the park’s development committee, is one of the pond’s devotees. He remembers taking his four daughters to visit the park and the pond.

“It made me love the park even more, when you see your children love it,” Davis said.

Davis remembers the fish kill in Lake Newport in 2015 caused by sewage run-off.

When asked what it looked like, he responded, “Armageddon.”

“When I saw the dead fish, something clicked in me,” Davis said. He decided to get involved in park advocacy and became the chairman of the development committee, where he advocated for installation of an aeration system in the Lily Pond.

At this time, local retired wedding photographer Pat McCamy and her husband were making a video of the park when they noticed the condition of the Lily Pond. The water was stagnant and smelled from the parking lot, McCamy said.

“I went there one day and a big snapping turtle had died,” McCamy said. “That made me really sad.”

McCamy also joined the development committee, penned a letter to the editor that ran in The Vindicator in May 2018 and started a change.com petition that nearly 800 have signed. She presented the petition to the environmental committee and the MetroParks board of commissioners.

“The aeration system keeps the pond circulated at all times and protects against future fish kills,” said Derico.

Aerating the pond promotes the growth of healthy bacteria, which help decompose leaves and lowers the nutrient growth that results in algae.

While the change is subtle, it’s noticeable to Davis. “The surface of the pond looks cleaner,” he said. “There’s less algae.”

McCamy agrees: “It looks like it’s really doing a good job. I was really pleased.”

Otherwise, the only signs of the system at work are a few rings of bubbles in the pond.

So as not to disturb the serenity of the area, the humming unit was placed in the woods near the pond’s parking lot.

Davis, who operates Davis Motel in North Lima, is pleased with the development and hopes that Mill Creek’s other bodies of water will receive attention, too.

“Having worked in the hospitality industry, I care not only about people’s shelter. I want animals to have nice shelter, too,” said Davis.