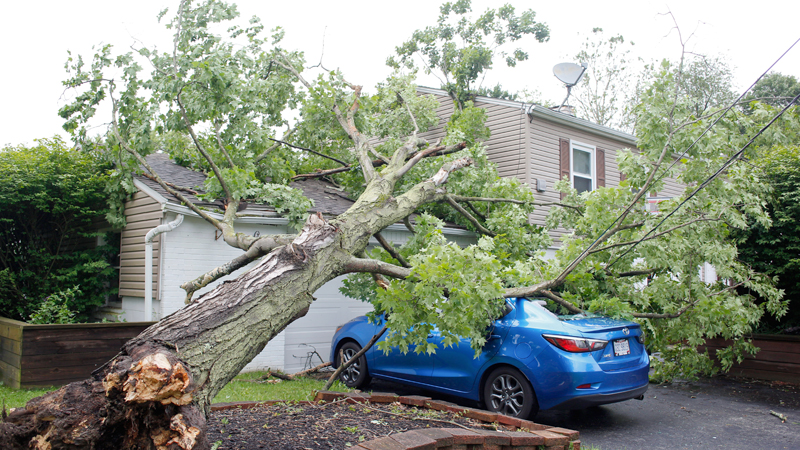 A storm that ripped through the Mahoning Valley on Sunday damaged homes, closed roads and left thousands without power. Trumbull County was hit particularly hard.

One storm in the Brookfield and Vienna Center is being investigated as a tornado.

“There were a lot of reports of damage,” he said. “It started at U.S. Route 422 and went all the way down through Warren and over toward Vienna Center and the Brookfield area. It seems there was a continuous damage path there.”

The weather service will send a survey crew to determine if the storm in Brookfield was indeed a tornado, Greenawalt said.

“The Brookfield Cemetery was hit, and it continued east over Bedford Road into the Kirila Development – down the ridge to ... state Route 82 and Brookfield Avenue area,” according to the report.

In Warren, a handful of homes along Tod Avenue Northwest suffered significant damage around 4 p.m. as high winds moving east knocked down trees and power lines.

Tod Avenue resident Angel Wargo said her grandchildren were watching cartoons at the time. When she heard a loud noise, she looked outside.

“Everything was white outside the window,” she said. “We took cover in the tub in the bathroom,” she said of her family, which includes her husband, daughter and grandchildren age 5 and 1. She heard a “boom” when a tree in their front yard hit their roof.

Stephens was at a restaurant in Austintown at the time. A neighbor across the street called to alert him.

“A neighbor called and said a tornado came right through,” Stephens said.

The direction that all of the trees fell and other indicators caused Wargo to also believe the wind was a tornado. Power was still out on Tod Avenue at 9:30 p.m.

The same wind that knocked down trees on Tod apparently was responsible for a roof torn off of the Carrier Services building on Mahoning Avenue across the Mahoning River fromTod Avenue. A metal fence in front also got knocked down.

In spite of the damage to their homes, Stephens and Wargo were extremely impressed with the outpouring of help that arrived to cut down trees that littered the yards on Tod Avenue.

“About 30 people, neighbors from everywhere, they came with chain saws. People from the police department. They cut all this,” Stephens said, pointing to piles of cut wood.

Stephens’ son is a police officer.

“There were so many people helping. I couldn’t believe it,” Wargo said.

She added no one was injured in her house, and she had not heard of anyone being hurt in her neighborhood.

Ramel Carpenter, meteorologist for 21 WFMJ-TV, The Vindicator’s broadcast partner , described the storm as: “A line of heavy downpours moved through Trumbull and Mercer counties with a few spinups and tornado warnings as a result.”

Warren’s McGuffey PK-8 School will be closed today due to a power outage and downed trees in the area caused by Sunday’s storms.

As a result, the Inspiring Minds program today at McGuffey is canceled. However, Inspiring Minds’ activities planned at Warren’s other schools will be as scheduled.

Reports also poured in to police agencies of trees down in Liberty, Warren, Howland and Newton Falls and flooding in Howland.

A tree fell on top of a house at 8207 Longview Drive in Howland.

At one point, more than 20,000 customers were without power in Trumbull, Mahoning and Columbiana counties due to the bad weather with the vast majority in Trumbull.

The frequent rain in the area, has made this month the sixth-wettest June in recorded weather history. Since June 1 it has rained 6.49 inches as of late Sunday afternoon.

The following roads were closed in Trumbull County due to debris in the roadway:

Carpenter said the forecast for today through Wednesday includes scattered showers today and a chance of flooding in the evening, and isolated showers Tuesday and Wednesday.

Thunderstorms are possible throughout the next two days as well. A flood watch for Mahoning and Trumbull Counties remains in effect until at least 4 a.m. Tuesday, according to the NWS.