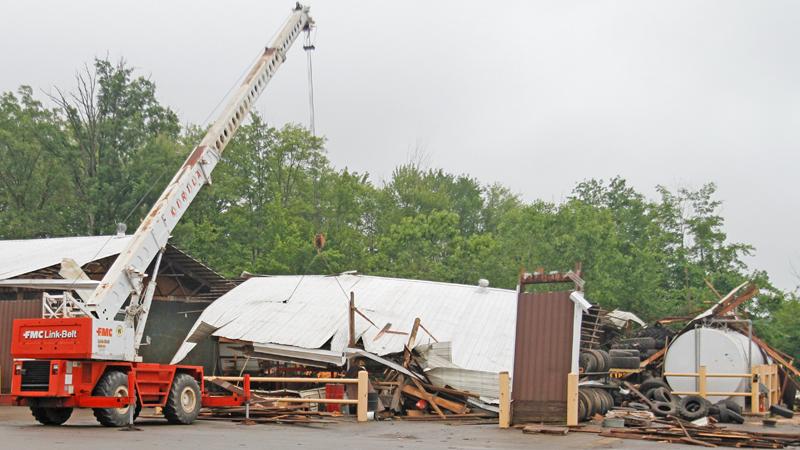 People from Warren to Brookfield are cleaning up after Sunday’s damaging winds after learning the mess indeed was created by a tornado – in fact, two of them.

The National Weather Service has preliminarily determined Sunday’s tornado was an F1 that began in Southington and tracked about 13 miles southeast before lifting over Warren.

Several out buildings were destroyed, and there was extensive tree damage.

Sarah Jamison with the National Weather Service in Cleveland was in Brookfield on Monday with a team assessing the damage. “It looks like there were two or possibly three tornadoes yesterday, one of which traveled over the state line from Ohio into Pennsylvania. Often times, you can have one strong storm that produces multiple tornadoes in its life cycle.”

In fact, the NWS says its survey of the eastern part of Trumbull County indicated a separate F1 tornado traveled 5.97 miles Sunday afternoon from eastern Vienna Township through Brookfield Township to the Pennsylvania line. It was just north of state Route 82 and lifted at West Hill in Masury.

The time period of the tornado was from 4:44 to 4:51 p.m. The NWS found damage indicative of a tornado with maximum winds of 95 mph and width of 250 yards.

Meteorologist Brian Mitchell said the eastern tornado developed out of the same thunderstorm as the one that hit the western part of the county, but because of the gap between the two tornadoes, it is considered to be separate.

A NWS meteorologist says the agency doesn’t have a good answer for why Trumbull has been hit with three small tornadoes in the less than two years, but it would like to do more study on that type of question for all of the counties it covers in Northeast Ohio and western Pennsylvania.

Meterologist Raelene Campbell said the storm that produced Sunday’s Trumbull tornado also produced a tornado in Cuyahoga County before lifting over Geauga County on its way to Trumbull.

She said a lot of people in the region have asked in recent months whether the kind of weather they’ve been having is unusual, but until the NWS begins carrying out county-specific studies of the weather patterns, it can’t give a good answer to that inquiry. Such work is likely to begin when severe conditions die down.

“It really is the luck of the draw from what we can see,” she said.

Such a study might answer why Sunday’s storm toppled trees from Southington to Brookfield instead of heading into Ashtabula County, for example, she said.

The Northeast Ohio/western Pennsylvania region averages about eight tornadoes per year, she said. In addition to Sunday’s twister, Trumbull had an F1 Jan. 8 that hit Bazetta Township before skipping over Mosquito Lake and damaging structures in Cortland. There were no injuries.

Another F1 traveled 1.25 miles through Fowler Township near Fowler Center on Aug. 16, 2017, knocking down trees but not injuring anyone.

Residents on both sides of Longview Drive in Howland Township and the director of the Trumbull County Emergency Management Agency say they did not suspect wind strong enough to knock down trees was coming Sunday afternoon until it hit.

Violet Stinedurf, whose house was not hit by the storm, said she normally goes to the basement when dangerous weather approaches.

“Dummy me, I was sitting on my couch looking at it,” she said of the wind that traveled up her street on the opposite side of the road, knocking down trees, one of which did serious damage to a house and car. The street is near Howland Township Park.

She thinks the reason she didn’t react more quickly is there was no thunder or lightning.

Sean Varley, the neighbor whose house and car were damaged, said he was upstairs in his house, while his wife and daughter were downstairs.

“I heard the windows popping,” he said. He went downstairs, where he picked up a mattress and threw it on top of his wife and daughter.

“It lasted about 30 seconds to a minute,” he said. From the basement window, he could see the odd look of the storm passing his house.

Linda Beil, director of the county EMA, said no injuries have been reported, and it does not appear any homes were destroyed by the storm, a requirement for financial assistance. She said 300 trees were knocked down at a Brookfield Township golf course. Beil agreed with others who said there were few natural warnings that there could be a dangerous storm approaching.

“It kind of came out of the blue,” she said.

Tornado sirens did sound in some parts of the county, but Ernie Cook, county 911 director said the center does not know whether all 90 Trumbull sirens sounded because the county does not operate many of them, including the ones in Warren.

It’s not clear how much of a delay it caused, but Warren fire Chief Ken Nussle said the city’s eight tornado sirens did not activate when the department first tried to sound them.

Nussle spoke with Bearcom, the company that supplies the equipment that sends out a radio signal to trigger the alarms. Bearcom said the circumstances suggest that rain, which was coming down when the activations failed, may have reduced the amount of distance the radio signal could travel and led to the problem.

Nussle said he is not aware of ever having this type of glitch before.

A resident of Lynwood Drive Northwest near homes on Tod Avenue Northwest that were hard hit by the storm, resulting in trees falling on houses, fences and power lines, complained in a call to the county 911 center Sunday afternoon.

Acting Warren Township police Chief Daniel Peterson has only been in that position two weeks, but it got especially memorable over the weekend, with the finding of a dead man Friday night, followed by a possible tornado Sunday afternoon and flooding around the Mahoning River.

“It seems like I’m being tested to see how much I can take,” Peterson said Monday morning.

One of the first reported sightings of the tornado was by an off- duty Ohio State Highway Patrol dispatcher who saw the storm in Southington near U.S. Route 422 and reported it to the 911 center.

It traveled along Parkman Road (Route 422) in Southington and into Warren Township, causing damage along Route 422.

The direction of the rain abruptly changed from vertical to horizontal and took trees with it, said Mary Rossi of Greenfield Street Northwest in Warren.

“It made a sucking, whooshing sound as it went through my backyard and it was over in two or three minutes,” Rossi.

Her home suffered some minor damage, but a neighbor’s large pine tree was uprooted and fell on a pickup truck in Rossi’s driveway. “All in all, we were pretty lucky. It could have been a lot worse. At least no one lost their life. That’s the big thing,” said Rossi.

Linda and Kevin Hanni, who live near Rossi on Lynwood Drive, also noted the speed with which the storm blew through.

“By the time I grabbed a cup of coffee and got to the bottom of the basement steps, it was over. I didn’t have time to be scared,” said Linda, who Monday was using a broom to brush off leaves and other debris that stuck to her home.

The former International Foods building on Mahoning Avenue NW, Warren, now vacant and owned by Carrier Services Group, was not so fortunate.

The force of the tornado peeled off much of the metal roof on the building, and Monday morning separate crews were removing the debris and nailing down a new roof.

The Jamestown Plaza Giant Eagle, kitty-corner across from Carrier Services and across from Northwest Bridge Road, had some signs blown off and several cars in the parking lot were damaged by flying debris. The store was open for business Monday.

Two Brookfield Township firefighters were caught in the tornado’s path while sitting in their ladder truck.

Firefighter/EMS paramedic Shane Stelk was in that truck on Lorain Street and recorded a video of the storm. The firefighters had just finished answering a call when Stelk said they could see a funnel cloud.

In the video, posted on the Brookfield Professional Firefighters Local 3443 page, a howling sound is heard before heavy winds whip around the truck.

After the storm, they went to work responding to calls about damage. Portions of Addison Road and Yankee Run were flooded. There were about 32 storm-related calls Sunday in the township.

“Property and belongings can be replaced. We are happy none of our residents were injured in our community or surrounding communities,” he said.

Stelk noted sirens were going off, but people were standing outside and looking to the sky.

“Warnings are there for a reason. They should be heeded,” he said.

The Brookfield Township Road Department spent Monday morning at the township cemetery on state Route 7 clearing trees that fell on gravestones during the storm. One gravestone that stood a few feet in height broke in half.

Across the street along Route 7, residents spent the day clearing their yards of tree and debris.

Resident David Baldwin left a Father’s Day gathering Sunday in Warren to check on his house on Bedford. Trees from his neighbor’s property fell in his yard, some panels flew off the front of his house and a live wire hung in front of his porch.

To the right of his house, closer to state Route 82, there were trees down in residents’ yards, but to the left toward Warren-Sharon Road there appeared to be no damage.

“I think I got off easy,” Baldwin said. “It could have been a lot worse. This was pretty mild. I’m not underestimating Mother Nature’s power; she can be a fickle woman.”

Kirila Construction Co. on the same road is an example of how things could have been worse: A building that housed some heavy machinery and tires collapsed. The company’s construction workers and contractors spent Monday assessing the damage.

At the Mr. D’s grocery store near Brookfield Center, employee Louie Hebert said the power went down, and shoppers were asked to take shelter in the meat coolers.

Yet some residents tried to leave the store. One shopper kept shopping and another was praying during the storm, he said.

Hebert said his jaw dropped when he looked outside and saw the storm coming. The doors were whipping open and shut. “I won’t forget it,” he said.

The employees, and even employees who had been off duty but wanted to help, took all refrigerated items such as meat off the shelves to preserve them in the cooler when the power went out, but right around the time they were finished, the power came back on, he said. The store was up and running Monday.

In addition to the wind damage from Sunday, the Warren area is also dealing with excess stormwater runoff.

The Trumbull County MetroParks has indefinitely closed the Canoe City and Thomas A. Swift MetroParks because of flooding. Both parks are on the Mahoning River, Canoe City in Leavittsburg and Swift in Braceville Township. The parks will reopen once floodwaters recede and cleanup has been completed.

The NWS says the Mahoning River at Leavittsburg reached 12.93 feet at 6:15 a.m. Monday. That is classified as moderate flooding. Ten feet is flood stage.