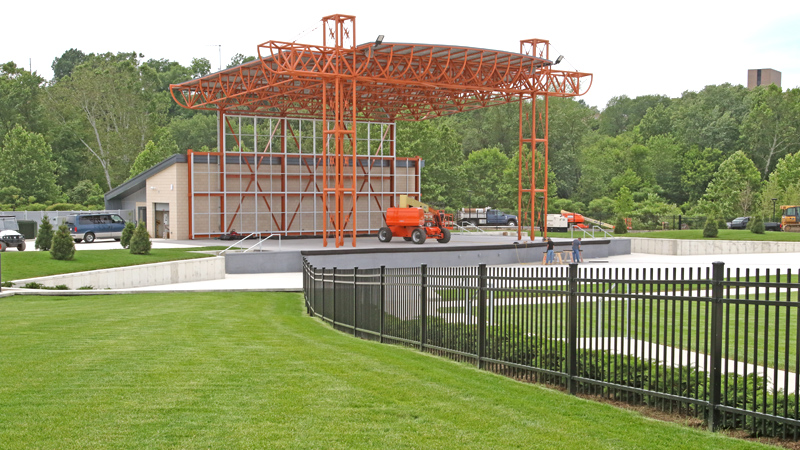 Eric Ryan remembers walking out of an April 6, 2011, meeting in which he proposed building an amphitheater to Youngstown City Council thinking: “It’s never going to happen.”

During that meeting, members of Youngstown City Council strongly objected to spending money for the amphitheater, which was pitched as a simple stage with a roof on it at the rear of the city-owned Covelli Centre.

“They shot it down and we left it alone for a few years,” said Ryan, president of JAC Management Group, which manages the park/amphitheater and the nearby Covelli Centre for the city.

“It’s been a very long process,” Ryan said. “It’s amazing to see what we envisioned and what we had on paper. It’s going to be a huge source of pride for Youngstown.”

The facility includes not only a much larger amphitheater than the original idea, it also stretches along 22 acres near the Mahoning River from the South Avenue Bridge to just west of Hazel Street. It includes a park, 1.2 miles of pathways, space under the Market Street Bridge for community events and transformed what was once a vacant, dilapidated industrial site into a state-of-the-art destination location, Ryan said.

“People will truly not believe they’re in downtown Youngstown,” he said. “When the park is done by mid-summer, people will get an experience they’ve never had in downtown.”

The project was done by Brock Builders Inc. of North Lima.

Ryan said he wanted the amphitheater for two reasons.

The first was the Covelli Centre, like most indoor facilities, has few events during the summer months. Most acts prefer to be outdoors during that time, Ryan said. Since the center opened in October 2005, it’s had only three July-to-September quarters with operating surpluses and two of them were about $4,000 each.

There are nine concerts scheduled for this year at the Youngstown Foundation Amphitheatre.

The other reason, Ryan said, is to provide a place for community events at an inexpensive price, something that can’t be done at Covelli because of costs.

A key part, he said, is a $500,000 deal over 10 years with Home Savings and Loan to sponsor a community event series.

Tickets for those events are $10 or less and free in some cases. They include Friday night’s “First Look” event with Geo C and Tha Storm, the Sensations and the Props as well as a wine and jazz festival on July 13, and The City of You Funk, Soul and R&B Night on Aug. 17 featuring the Ohio Players.

Home Savings is one of the four funding partners for the facility.

The rest of the money to build the facility came from a $4 million loan from the U.S. Department of Housing and Urban Development to be paid over a 20-year period starting in 2020.

While the amphitheater project stalled for years, it finally took shape during John A. McNally’s administration as mayor.

The amphitheater is on property that included the former Wean United building site on South Phelps Street. The building, which was one of downtown’s biggest eyesores for years, was demolished in 2014 by its owner and turned over to the city, which cleaned the site.

McNally said he wanted “more than an amphitheater. My thought was we should have some larger greenspace in downtown.”

McNally said he’s walked by the site and is impressed.

“I’m happy to see it is opening up,” he said. “Eric and his company have done a good job to make it happen. I think it will be a great community asset. It’s a great new look to the location.”

Mayor Jamael Tito Brown said: “It’s a big deal for the city to have a premier amphitheater. It’s not just a sound stage on the back of the Covelli Centre. We’re attracting a lot of national acts.”

During the 2017 mayoral campaign for the Democratic nomination, Brown expressed concerns about the amphitheater, particularly the use of the $4 million in federal money, saying the city needed to focus on private sponsorships. The sponsorship deals were signed during Brown’s tenure as mayor.

“I wanted to see more private investment and we were able to get that,” Brown said. “This is a great economic catalyst for the city. It’s creating a buzz for the Mahoning Valley. This amphitheater will attract people from throughout the region. It will help the downtown businesses.”