The Sofranecs honored for 65th anniversary 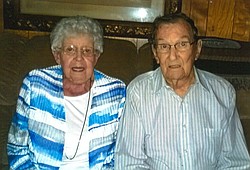 Joseph and Janet Sofranec of Poland recently were honored for their 65th anniversary with a dinner party at their home.

Mr. Sofranec and the former Janet Marie Fineran were married May 15, 1954, at St. Nicholas Church in Struthers.

Mrs. Sofranec worked as a bookkeeper at Ben’s Modern Applicance in Youngstown before retiring in 1954 to raise her children.

Mr. Sofranec worked as a supervisor for LTV Seamless Tube in Youngstown before retiring in 1986. He also served in the U.S. Army during World War II. He was a Second Harvest Food Bank board member, Red Cross blood drive volunteer, BBB arbitrator for auto line lemon law and currently is a Poland pantry officer.

The couple are members of Holy Family Church in Poland.