The Griffithses celebrate their 70th anniversary 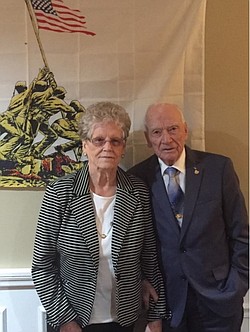 Ralph and Florence Griffiths of Girard recently celebrated their 70th anniversary at home surrounded by family and friends.

The couple’s sons are Ralph Griffiths of San Diego and the late Frank Griffiths. Two grandchildren and five great-grandchildren complete their family.

Mr. Giffiths and the former Florence Spillman were married June 4, 1949, at First Assembly of God in Girard where they remain members.

Mrs. Griffiths was an assembly worker for Packard Electric in Austintown until she retired in 1991.

Mr. Griffiths was a sales manager for Institutional Foods in Warren until he retired in 1996. He is a veteran of the U.S. Marine Corps and an Iwo Jima survivor who served with the 2nd Platoon, Easy Company, 28th Regiment of the 5th Division that raised the flag. He also is a member of the American Legion.