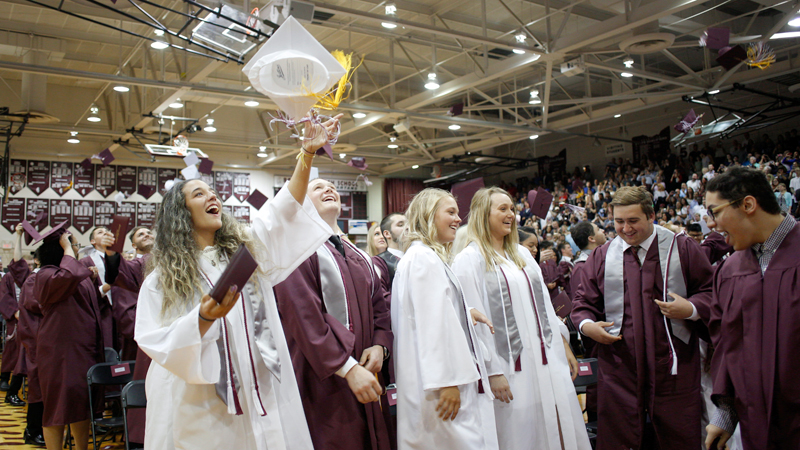 One of Yelisa Cortez’s most enduring high-school memories probably will be when she played six characters in a one-woman play as part of being on the speech-and-debate team.

“I like acting. I just like to entertain people and make people laugh,” she said with glee.

When it came to reaching her next major milestone, however, Cortez stayed in character as herself when she joined 330 fellow graduates who crossed the stage to receive diplomas during the Boardman High School Class of 2019’s commencement Sunday afternoon in the gymnasium.

Before being part of the team’s humorous-interpretation category, Cortez had other adjustments to make, such as getting used to new faces and a wider range of opportunities, because she arrived in Boardman at the start of her junior year from Chaney High School, she recalled.

Fast-forward less than two years later, however, and “I feel free and happy I made it this far. I feel like I’m dreaming,” she said about being on the cusp of graduating.

As for the next step in her life, Cortez is still exploring her options. She’s hoping to fuse her love of dancing with a major in business, possibly from Ohio State University, before attending a dance college in California and perhaps opening a studio, said Cortez, who also was part of the Boardman Spartans Television Network program.

Augustino F. Arcuri’s moves through life likely will vary greatly from Cortez’s, because he has his sights set on reporting July 1 to the U.S. Military Academy at West Point in New York to train to become an Army second lieutenant, he said proudly.

“I’ve always admired people in the military,” said Arcuri, who glowingly recalled having been surrounded by his parents, fellow students and other supporters as he signed a letter of intent in Boardman High’s library to attend West Point.

After four years as a cadet, he may work in the military or civilian sector, but “either way, I can’t go wrong,” he said.

Arcuri also is looking forward to playing on the academy’s football team, which would be in lockstep with his having played three seasons as a defensive end and left tackle for the Boardman Spartans, who made back-to-back playoff appearances, he continued.

His talents also include having performed opera numbers during Christmas and spring concerts as part of Chorale, his school’s most elite choir, including in one show that featured selections from the Jonathan Larson Broadway musical “Rent.”

Giving the keynote address was Superintendent Timothy L. Saxton, who advised the grads to realize that personal growth is now solely in their hands, try to resist the natural urge to play “the comparison game” and understand that decisions they make won’t necessarily have finality attached to them.

“Compare you to you and be the best ‘you’ you can be,” added Saxton, a 1984 Boardman High graduate.

He also praised the Class of 2019 for its leadership abilities and community-service efforts, as well as the students’ academic, artistic and athletic accomplishments.

“I’ve never felt closer to a class. It’s been a privilege to watch you grow,” Saxton said, fighting back tears.

Making similar comments was Principal Cynthia M. Fernback, who encouraged the grads to appreciate where they came from, the foundation built for them during their lives and the parents who nurtured them. She also urged them to “lift their wings” to make positive impacts on others.

In his closing remarks, Daniel Turillo, senior class president, urged the class to spread warmth, hope and compassion to others, use its talents and intelligence to improve the world and continue to learn and perform community service.

Making additional remarks was Avamarie V. Colaluca, who plans to attend the University of Cincinnati.