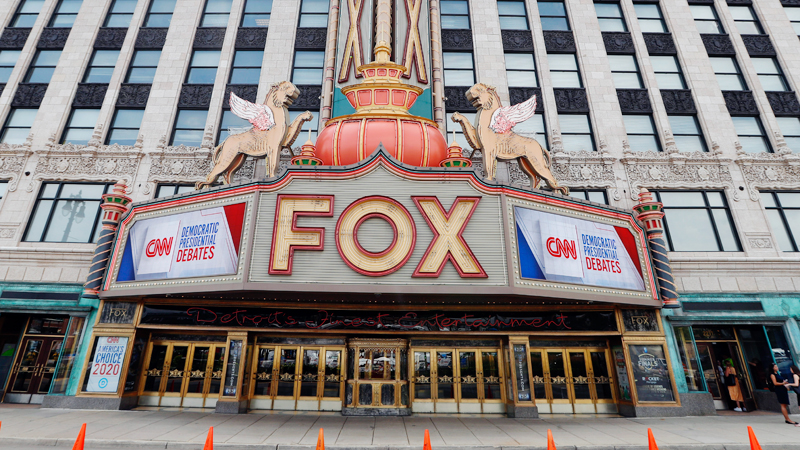 Photo by Associated Press | The Fox Theatre in Detroit is the site today and Wednesday for the second Democratic Party presidential debate. U.S. Rep. Tim Ryan of Howland, D-13th, will share the stage tonight with nine other hopefuls, including U.S. Sens. Bernie Sanders of Vermont and Elizabeth Warren of Massachusetts.

Tonight could be the last time U.S. Rep. Tim Ryan appears on the Democratic presidential debate stage, but he plans to make an impression.

“I want to really focus on my agenda and the message I want to get out,” he said. “I will try to be prepared for anything that comes out.”

Ryan of Howland, D-13th, shares the stage with nine other candidates during the 8 to 10 p.m. debate in Detroit. A second group of 10 Democratic presidential candidates will debate Wednesday. The debates will air live on CNN.

Unlike the initial Democratic presidential debates on June 26 and 27 in Miami, candidates in the second one will have opening statements, which Ryan said he likes.

“I want to say something interesting in the opening,” he said. “The things that I’m pushing that I didn’t get a chance to talk about the last time I want to discuss in this one – the economy, energy, health care, education, building up downtowns. It’s an agenda a lot of Americans are interested in. It’s only a minute opening. I want to provide a larger context for what I’ll be talking about during the debate.”

Ryan said he felt “frustrated” during the first debate with the moderators who virtually ignored him during more than half of it.

“CNN says it’s going to be monitoring time so everyone gets their fair share,” he said. “I’m optimistic this will be a more balanced debate than the first. You don’t want to be a bull in the china shop or be obnoxious, but you need to present your ideas. I need to be strategic.”

Ryan will stand second from left – as he did during the first debate June 26 in Miami. Williamson is on the far left and Klobuchar is to Ryan’s right.

Ryan said he wants to tell the audience “what it’s like to lose factories, lose jobs, lose the newspaper, what happens when the community collapses. Most communities are like us. We need a national agenda to affect all these communities.”

Ryan qualified for this debate – and the one last month – by polling with at least 1 percent in three qualifying polls. He polled at 2 percent in one poll, which guaranteed him a spot.

The other way to make the stage was to have at least 65,000 unique donors with a preference given to those who had both followed by the highest polling numbers and then the most unique donors.

However, to qualify for the third debate in Houston on Sept. 12 and 13 – the latter date if more than 10 are eligible – and a fourth in October is significantly greater.

Candidates need at least 130,000 unique donors, with a minimum of 400 different donors from at least 20 states, and at least 2 percent support in four qualifying polls between June 28 and Aug. 28.

Ryan reported earlier this month he had more than 13,000 donors – about 10 percent of what he needs. He hasn’t polled at 2 percent in any qualifying poll. To date, seven candidates have met both thresholds.

When asked about the third debate, Ryan said: “I’m not really thinking about that at all. I’m worried about getting my message out [tonight]. I’m in the fight. I’m in it to win it. You stay focused. After this debate, they’ll know who I am and what I stand for and let the chips fall where they may. I don’t have the name recognition yet. Being on the debate stage is a big opportunity.”

Ryan said the 130,000 minimum for the third and fourth debate “is ridiculous. You’ve got candidates from the money centers raising money from high-dollar donors and they’re literally paying $50 to get a $1 or $3 donation and they’re paying money for Facebook ads to get on the stage. That is not the way to winnow the field. To limit it to 130,000 low-dollar donors is wrong. We should let the process play out. Not everyone is paying attention at the end of July. It is what it is, but to start to do it now is not the right way to go.”