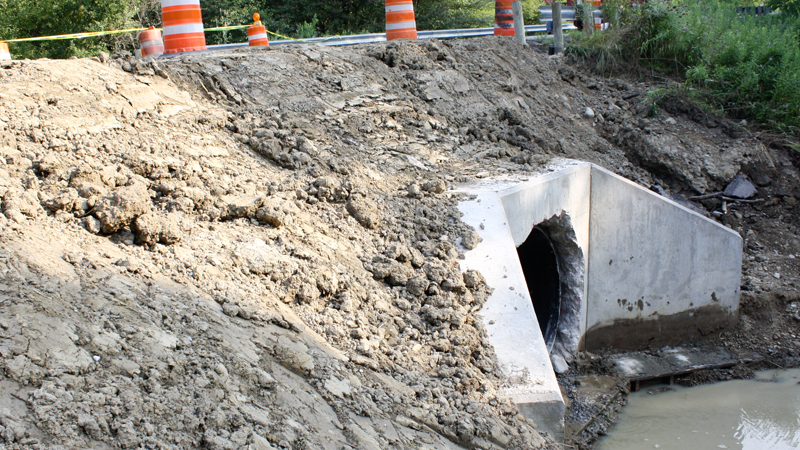 Photo by Ed Runyan | This is a culvert on Kinsman Pymatuning Road in Kinsman that was washed out July 20 by water flowing into it from the north. The Trumbull County Engineer’s office was working on it Monday.

The worst home-related damage from the July 20 flood that hit Kinsman and two other northern townships was at the home on state Route 7 belonging to Richard Leonhard, father of Kinsman Township Trustee Greg Leonhard.

On Monday, Rose Leonhard, Greg’s wife, showed a reporter the inside of the home, where family members and volunteers removed nearly all of contents of the basement and first floor over the past week.

The Leonhards have lived in the house north of Kinsman Lake since 1969, and this is the first time the family ever had a problem with flooding, Greg Leonhard said. The house is between Route 7 and Stratton Creek, which flows into Kinsman Lake just south of there. Rose Leonhard said the home got hit with water from both sides – flowing west from Stratton Creek and from the other side of Route 7.

The Leonhards and about 35 helpers worked through the weekend to take out the damaged contents, wearing breathing masks as they worked to prevent damage to their lungs from the two inches of mud still on the floor in the basement and other dangers.

One large, commercial garbage container was filled and taken away earlier, and a second is nearly full. People also hauled loads of refuse in trucks, she said.

“When we came in, it was just unbelievable,” Rose Leonhard said of when the Kinsman community started to assess the damage from the nearly eight inches of rain that fell in 24 hours.

Disbelief has been a common reaction to the damage the floodwaters did to culverts, roads, a bridge and the Kinsman Lake Dam, whose earthen embankment washed away in one place, leaving residents of 21 homes in the Lakelands neighborhood with no road access in or out.

“There was so much water all at once,” said Skip LaPlante, a Lakelands resident who is president of the Lakelands Neighborhood Association.

Estimates are running at around $3.5 million to fix the Kinsman Lake Dam, a destroyed bridge on Kinsman-Pymatuning Road and roughly 10 other county culverts and roads.

All of the roads affected by erosion damage are back open except for the road over Kinsman Lake Dam and the destroyed bridge on Kinsman Pymatuning, Klejka said.

The Kinsman-Pymatuning bridge will need to be engineered before it can be fixed and reopened. Cost is estimated at $800,000.

The county engineer’s office made culvert repairs on Ashtbula Dennison and Higgins Dorset roads in Greene Township and repaired roadways and culverts on State Street and Kinsman Nickerson Road. There was also damage on Barclay North Road in Gustavus Township.

Mark Posey, lifelong Kinsman resident and township zoning inspector, said the high waters experienced are the worst in his lifetime.

“I’ve seen high water before, but never of this magnitude,” he said.

Kandis Suhar, who lives on state Route 7 at Morford East Road, said her home had a couple of inches of water in the basement because the sump pump could not keep up, but she otherwise had no damage.

She woke up to “incredible” thunder at 3:30 a.m. July 20 and could hear the rain coming down in “buckets and buckets.”

Trustee Linda Miller last week called the displacement of the 21 families in the Lakelands neighborhood a “tragedy.”

LaPlante said officials are hoping to build a “quick, temporary road” to allow Lakelands residents to drive their vehicles back out. He said residents have been told that they could continue to be displaced from their homes another “60, 90, 120 days.”