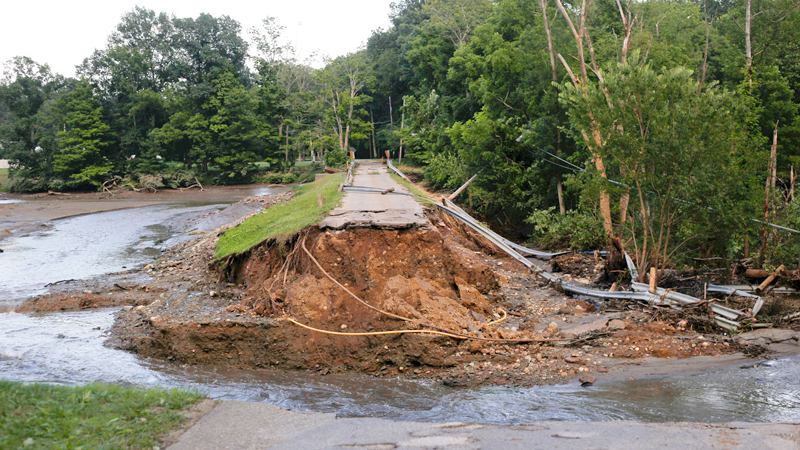 After an inspection report of the

Department of Natural Resources asked the owner, Kinsman Lakelands Association, to hire an engineer and address several issues related to the ability of the dam and causeway to withstand floodwaters.

The association, made up of homeowners in the Lakelands neighborhood near the dam, did not carry out the requirements, ODNR said Thursday.

The report points out several problems that could endanger safety of the structure. These include concrete deterioration, spalling and water seepage; separated joints; a broken drain outlet pipe likely from impact of large debris; a bulging wing wall; and collapse of a concrete basin.

A part of the earthen causeway overtopped and washed out Saturday morning after about 7 inches of rain fell in 24 hours, eliminating the only roadway into and out of the Lakelands neighborhood, resulting in the residents being evacuated by another route. The rain also caused damage to other roads in Kinsman, Greene and Gustavus townships.

Skip LaPlante, president of the association, said Thursday he was not familiar with the “required remedial measures” in the report but said the dam itself is not the reason the causeway overtopped and washed away Saturday morning.

LaPlante said the washout happened because “there was so much water all at once,” not because of a failure of the dam, which is a couple of hundred feet east of the part of the causeway that washed out. LaPlante

said the location of the washout is where eight trees came down, which exposed soil under the causeway and led to the failure of the earthen structure.

“I saw it. It had nothing to do with the dam,” he said. “The water was 100 times more than [the causeway and dam] could handle.”

LaPlante said the association was asked to make changes about six years ago related to trees that needed to be removed, and the association did that. The 2016 report mentions that an emergency action plan was approved for the dam in late 2012, but it doesn’t describe the details.

The 2016 report said the association needed to hire an engineer to determine whether the lake’s water-storage capacity and ability to pass stormwater over the dam’s spillway was sufficient to handle a “required design flood without overtopping the embankment.” It also asked an engineer to “prepare plans and specifications as necessary to increase” the dam’s floodwater capacity.

The required design flood is a determination of how much of a flood event the dam should reasonably be able to accommodate without overtopping and possibly destabilizing the dam.

The report says the ODNR did not “thoroughly investigate” on its own whether the dam could withstand the “required design flood,” but it did perform calculations in 2000 that determined the dam and lake did not appear to be able to accommodate the required amount of floodwaters.

The 2016 report also said the dam’s spillway needed to be repaired or replaced. The report asked the association to “prepare plans and specifications for repair or replacement.” The report described a “concrete apron and stilling basin slab” that have “completely failed.”

Kinsman Township trustees Greg Leonhard and Linda Miller both said they were not aware of the 2016 report, but when told of it, Leonhard said he wonders why the township was never notified of the issue since the township maintains the road over the spillway.