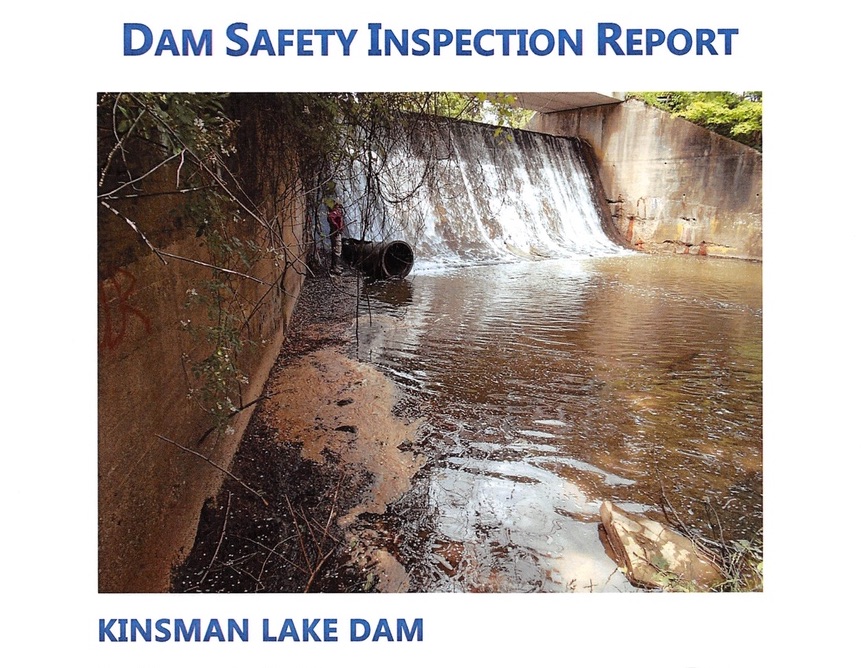 The most recent 2016 inspection report of Kinsman Lake Dam by the Ohio Department of Natural Resources’ Division of Water Resources Dam Safety Program points out several problems that could endanger safety of the bridge.

These include concrete deterioration, spalling and water seepage; separated joints; a broken drain outlet pipe likely from impact of large debris; a bulging wing wall; and collapse of a concrete basin.

The dam owner, Kinsman Lakelands Association, was urged to remove trees and brush from upstream and downstream, establish a proper grass cover, monitor the wing walls and weepholes for increased flow or instability, and to contact the Trumbull County Engineer if displacement of the right wing wall continues — “as abutment collapse could endanger the safety of the bridge.”

The water took out the road – the only road access for about 50 people in about 20 homes in the Lakelands neighborhood who had to be rescued by another route through the woods. There were no injuries, but several homes may end up being a total loss.

When told about the report, Skip LaPlante, Lakelands president, said he does not believe problems with the dam caused the overtopping and washout of the earthen embankment, which he referred to as the "causeway."

LaPlante said the area where the water broke through the embankment was hundreds of feet from the dam and resulted from the enormous amount of water that flowed into the lake from the 7 to 8 inches of rain that fell in a short time.

"It was a natural disaster," LaPlante said, adding that the parts of the report a Vindicator reporter read to him are not familiar to him.

He said the association did make improvements that ODNR requested about six years ago, but he does not remember ODNR requiring the association to "perform a hydrologic and hydraulic study to determine the adequacy of the dam's discharge/storage capacity to safely pass the required design flood."