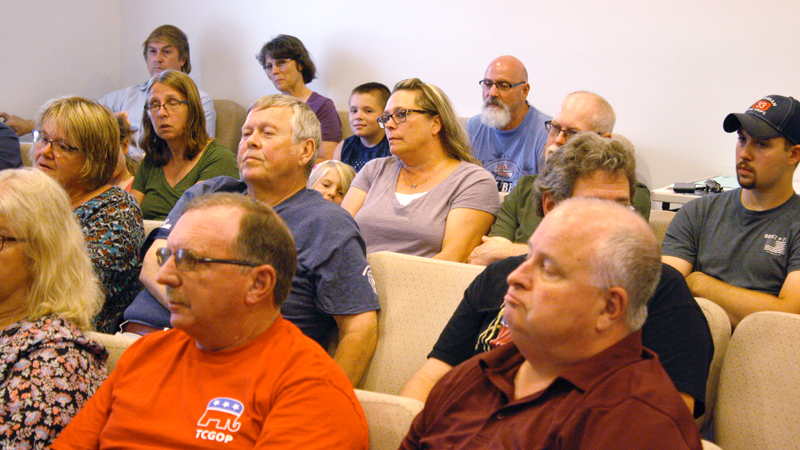 Photo by Ed Runyan | Kinsman residents attended the Kinsman Township trustees meeting Monday night with many of them complimenting the community and the response to the flooding Saturday in various areas of the township, including the damage to the earthen embankment at the Kinsman Lake dam that required the people there to be evacuated.

The water took out the road — the only road access for about 50 people in about 20 homes in the Lakelands neighborhood who had to be rescued by another route through the woods. There were no injuries, but several homes may end up being a total loss.

The concrete dam, which controls the outflow of water downstream, suffered relatively little damage. The dam’s gate no longer works, but Smith said he doesn’t think that failure was a significant cause of the washout.

“My estimation from everything I’ve seen, the weather reports, suggests there was 7.8 inches over a 24-hour period according to the radar. We know that amount of rain occurred over a much shorter time span, at least the heaviest concentration.

“At the end of the day, I believe there was just debris that probably blocked the dam ... the lake was rising. Heavier material was coming in toward the overflow of the dam. The dam became restricted. The water continued to rise. It crested over the road. Once it crested over the road, the erosion of the embankment ensued, and then it just failed.”

Smith hopes to provide state officials with a cost estimate to fix the damage shortly, as state officials search for funding. A repair plan has been formulated, but Smith’s office wants to discuss it with the U.S. Army Corps of Engineers before moving forward, Smith said.

At Monday night’s Kinsman Township trustees meeting, Trustee Linda Miller said she has spoken with officials in hopes that a state of emergency will be declared by the state and federal governments.

One woman who attended is among those displaced in the Lakelands neighborhood. The woman, who did not want to be identified, was hoping to know what method the township would use to communicate with the Lakelands residents.

Miller said she is collecting cell phone numbers from everyone and there will be communications soon about getting back to their homes to dispose of destroyed food in refrigerators and freezers. Trustee Greg Leonhard said Lakelands residents with questions should call the trustees.

Others expressed thanks for the numerous fire departments that responded with help and community members who brought food and water for the firefighters. One woman was hoping for a way to donate to the people who have been displaced. “I didn’t lose access to my home, but I feel terrible for the ones who did,” said Ryndel Miller.

It’s premature to discuss the cost or how long the repair will take, but Smith said he believes an interim fix to get people back in their homes can be made “in relatively short order.”

He met Sunday in Kinsman with several state legislators and the local and state emergency management agencies. State Sen. Sean O’Brien of Bazetta, D-32nd, is trying to secure funding, and the congressman representing Kinsman, David Joyce of Geauga County, R-14th, will tour the area on Wednesday.

The county engineer’s office worked throughout the weekend to repair flood-related damage to 12 other Kinsman locations. Erosion-related repairs are finished in Gustavus and Greene townships. Other work will continue another couple weeks on a washed out bridge and culvert on Kinsman-Pymatuning Road in Kinsman Township.