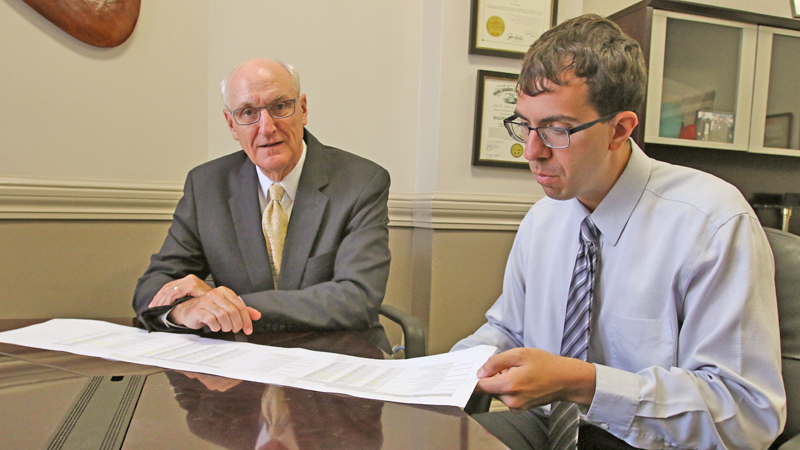 All but one school district in the Mahoning Valley lost eligible students between 2014 and 2018, according to the Ohio Department of Education.

The Mahoning County Auditor’s office has compiled financial data for 14 public school districts in the county. The Vindicator added Trumbull County schools to expand the comparisons.

Meacham’s office expects to distribute more than $150 million in 2018 property tax revenue to the county’s school districts, accounting for nearly 61 percent of the total collected taxes. His office on Monday released a financial summary for all 14 county schools districts — pulled from ODE’s annual Cupp Report, five-year forecasts compiled by each district and salary information from district treasurers — to show where that money’s going.

From 2014 to 2018, Canfield Local Schools was the only public district in Mahoning or Trumbull counties to see an — albeit marginal 0.73-percent — increase in average daily membership, an ODE metric indicating how many full-time public school students live within the school district or are eligible to attend.

Membership declined in all other districts over those four years. In Mahoning County, Lowellville lost the most, 17.75 percent. In Trumbull, Bristol Local and Bloomfield-Mespo Local each lost more than 21 percent.

“Looking at this, you should be able to see the system as currently designed is not sustainable in the long run,” Meacham told The Vindicator. “I think we have to look at how we’re providing education to children in Mahoning County now and look for long-term, sustainable options.”

Alex Geordan, Canfield superintendent, gave much of the credit for the district’s retention to its all-day kindergarten program, established six years ago to follow through on a levy campaign promise. When students grow up in the district, their families tend to stay, he suggested.

“By doing that, now our [enrollment] numbers have stabilized,” Geordan said. “Every time a district loses somebody, that [state] money follows the child. Any time we can retain those at-risk youngsters ... that’s retaining not only the population, the enrollment, but tax dollars as well.”

This coming school year, the Canfield district expects to have the largest kindergarten class in several years — more than 100 pupils at each elementary, Geordan said.

Austintown Local Schools has the second-highest enrollment in the county, 4,458 students in fiscal year 2019, behind Youngstown City Schools’ 5,258 students.

When comparing superintendent salaries included in the summary, former Austintown Superintendent Vince Colaluca was the highest-paid in Mahoning County before his retirement in June, when he was making $120,814 a year. But that district also reported the lowest average salary for classroom teachers in the county in 2018, $46,883.73.

“We have a very young group of educators in our district, which is great, I think,” said Don Sherwood, school board president, adding the district has hired more than 20 teachers since 2014.

Though the Austintown district also spent the least per student in 2018, $9,746.78, that figure’s on-par with similar-sized districts such as Boardman Local or districts with a larger property tax base such as Canfield Local, said district Treasurer Blaise Karlovic.

“In a nutshell, we receive less tax dollars per student, yet spend the same if not more per average direct student instruction than our neighbors,” Karlovic said.

Another statistic highlighted in the ODE summary is each district’s unreserved fund balance, or how much money remains unspent at the end of the fiscal year.

Canfield Local’s 2018 budget was about $27.4 million, nearly $15.3 million or 56 percent of which was carried over. Geordan said the district is preparing for pricey updates to aging buildings and must also price repairs after flooding damage during the May 28 storm.

“Many districts have expenses that outpace their revenue,” Geordan said. “Part of our strategic plan ... was we need to live within our means and we need to have a balanced budget in Canfield.”

To view the full spreadsheet containing financial summaries of all the Mahoning Valley’s 34 school districts, visit this story on Vindy.com. More Mahoning County tax transparency documents are also available on the auditor’s website at mahoningcountyoh.gov.