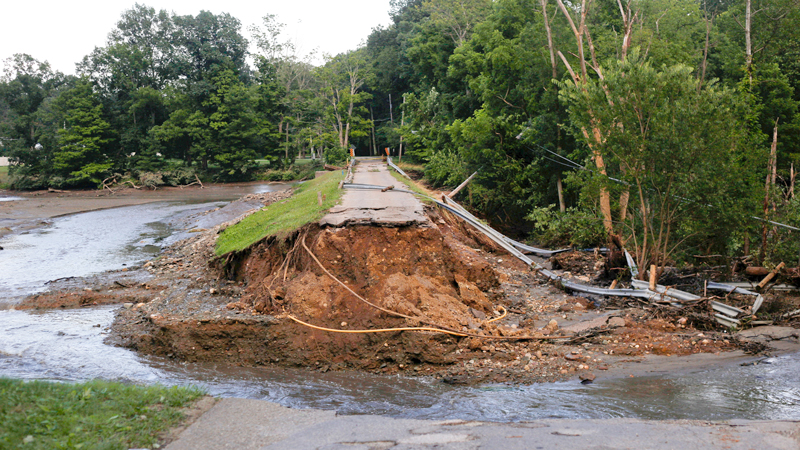 Kinsman Township is digging out from the damage caused by flooding early Saturday including the destruction of part of the Kinsman Lake causeway, the only access to and from the mainland for the residents in the Lakelands area who live along the shores of the lake near downtown Kinsman.

The flooding occurred at Kinsman Lake and elsewhere in Kinsman when about 7 inches of rain came down between 6 and 8 a.m.

“We evacuated 55 people and 30 animals by entering the Lakelands through a farmer’s property off state Route 5 on ATVs. People came from all over to help,” said township Trustee Vice Chairwoman Linda Miller.

Several Lakelands residents refused to leave their homes; but everyone who wanted to leave was removed safely, Miller said.

“We’re looking at at least two months to repair the causeway,” she said.

She estimated the storm caused at least $2 million in damage to road beds, culverts and two other small bridges that were washed out, including major flood damage across state Route 7, the major north-south route through Kinsman.

“We’ve had flooding before, but nothing like this,” said Miller.

She said Trumbull County Engineer Randy Smith said he hasn’t seen this much damage since the 1985 tornado struck the area.

An incident command post was established at the Heritage Hill Farm property on Route 7.

“Within an hour a plan was in place. Our main concern was to make sure people were safe. Today we’ll regroup and figure out what has to be done next,” Miller said.

She said the people who are left homeless are devastated.

“After we got everybody out, we loaded them on a school bus and took them to a church. They are worried are about their property. A lot of them are older and to move into someone else’s house for an extended period could be an issue,” Miller said.

Miller said the township is grateful for the assistance in dealing with the flooding for all the neighboring fire and police departments and others who helped meet the emergency.