The Reeds honored for golden jubilee 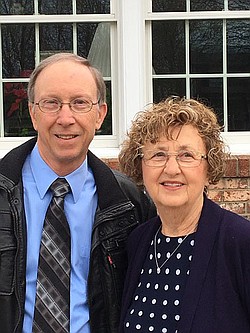 Bryan and Traudi Reed of Canfield were honored recently on the occasion of their 50th wedding anniversary during a surprise party with friends and family.

The event was hosted by the couple’s children: Vicki Reed (Chad Michener) of Orange and Rob (Jessica) Reed of Canfield. Four grandchildren, Halina and Taryn Michener and Max and Haley Reed, complete their family.

Mrs. Reed taught German and English at Salem City Schools before retiring in 2004. She is a member of the Saxon Club, Silver Sneakers and Red Hat Group Lizzies. She also volunteers at Fellows Riverside Gardens.

Her husband was the president of Hearn Paper Co. before retiring in 2003. He is a member of the Youngstown Lions Club and a U.S. Army veteran.

The couple are members of Lord of Life Lutheran Church in Canfield.